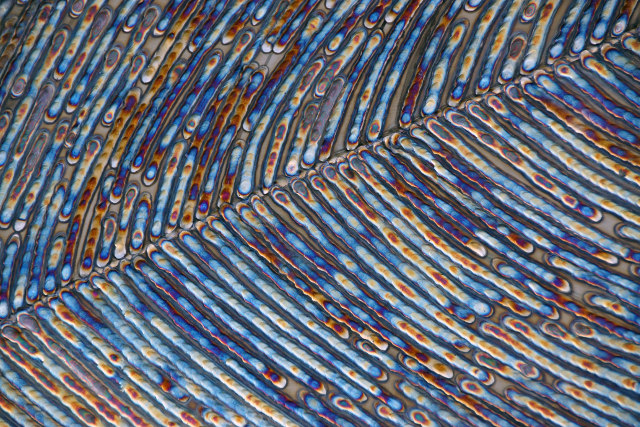 Resembling the skeleton of a fallen leaf cast in molten metal, this artwork is just one of an immense body of work by sculptor Nick Tommey. I love the way it shifts from sky blue to burnt orange – offering the sense of rivulets of hot and cold air running together. Nick first began to develop his particular artistic style during a period working as a welder in San Francisco, after becoming intrigued by the visual patterns created by ‘energy exchanges’.

“I’m drawn to natural, chaotic patterns and rhythms – anything that shows evidence of an energy exchange – erosion patterns, growth patterns…” he says. “It’s the evidence of an energy exchange that I’m most interested in. The warping of the metal, the coloured oxidation of the stainless steel, coupled with my own energy input by the manipulation of the material, is at the core of my work.” 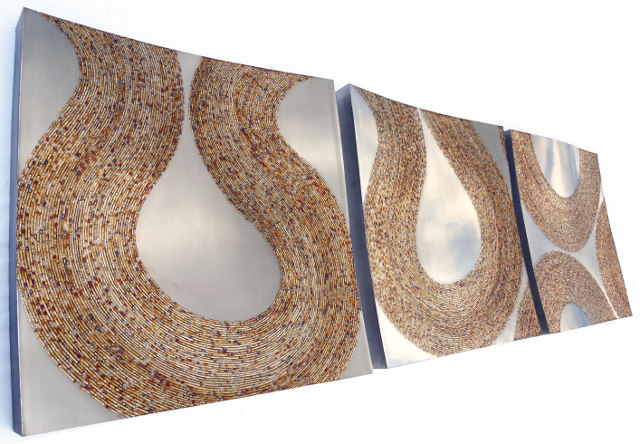 Nick initially wanted to become a photographer, “but before you can do a degree in photography, you have to do a one-year foundation course which covers a wide range of disciplines, one of which was sculpture,” he explains of the path that led him here. “It seemed the most natural way of working for me, and I have been working and thinking three-dimensionally ever since. 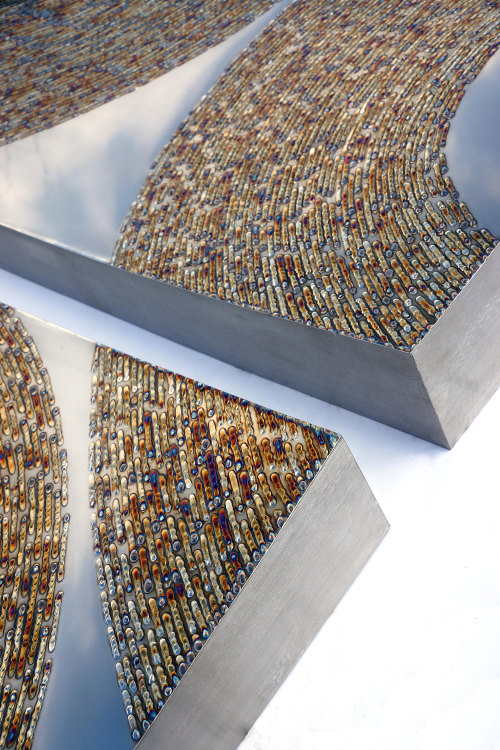 After finishing his art foundation course in Cheltenham, Nick moved to Sheffield. “I was drawn to the city because of its cheap and plentiful studio space – as the city was in depression and there were a lot of closed down metal workshops,” he comments. “As I was working more and more in metals, it seemed a natural choice.”

Nick lived there for three years before moving to San Francisco, where he found employment as a metal worker, and where, due to high rent prices, “my sculpture had to be put on a back burner. I continued to make work, but very slowly as I could only ‘weld for fun’ during lunch breaks and so on.” 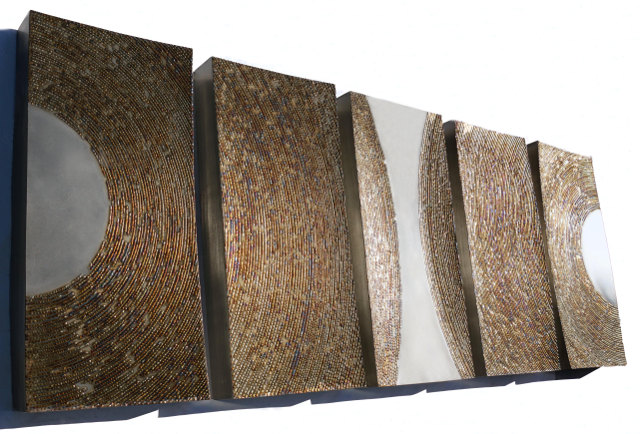 Nick worked for various metal shops, “often doing lots and lots of TIG welding. It was my interaction with the materials and observing how they responded to my interaction that provided the starting point of my particular style of work.”

Through his sculptures, he says, Nick is “attempting to set up my own chaotic structures through the almost mindless repetition of the welding. Unintended rhythms appear in my work the same way they do in natural patterns and rhythms like sand dunes, fingerprints, and so on.”

Nick remained in San Francisco for eleven years before returning to England in 2008. “I am now able to make sculpture the majority of the time.”

Making the work itself is only part of the pleasure for Nick. “One of the things I get the biggest kick out of is thinking about what happens to a piece after it has sold, where will it end up, who will own it, who will it communicate with,” he says. “It’s a way of living beyond yourself. Even after you die, you can still be communicating with people. I’m playing around with some bronze castings at the moment, and it’s great thinking that the bronze pieces that I am making now could last for thousands of years!”

The majority of Nick’s larger pieces go to Melissa Morgan Fine Art in Palm Dessert, California. Smaller pieces can be seen at Paragon Gallery in Cheltenham. You can view all of Nick’s work on his website www.nicktommey.co.uk.