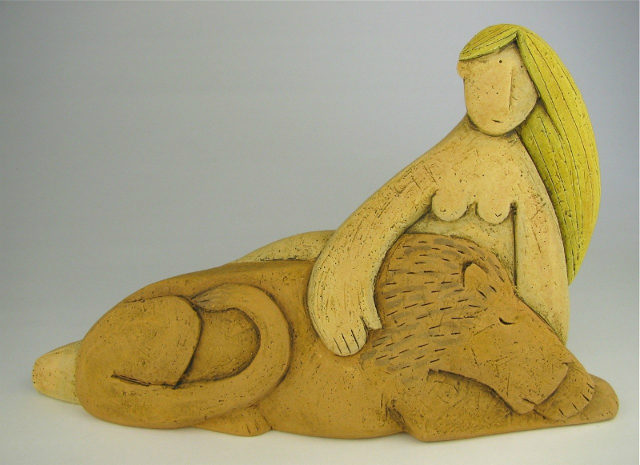 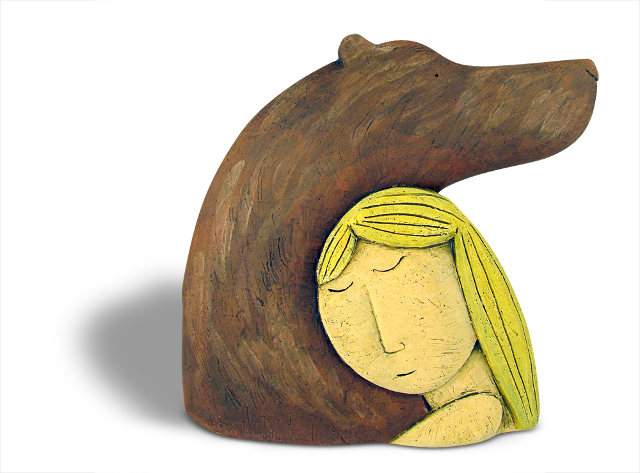 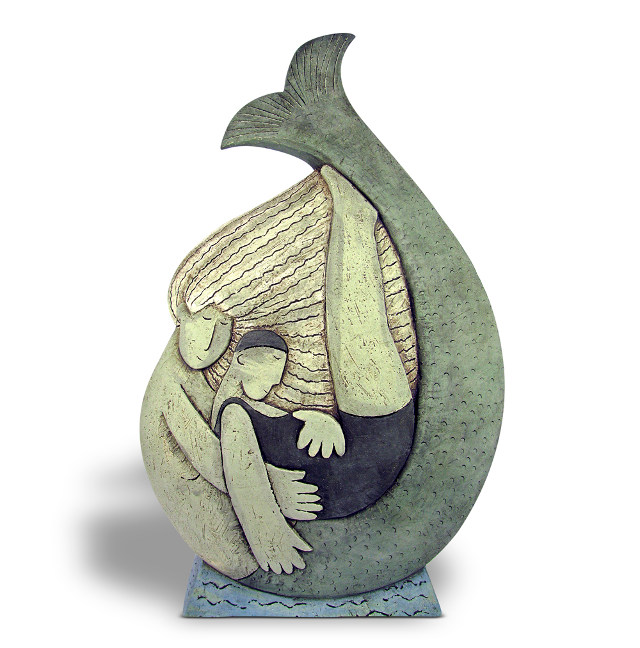 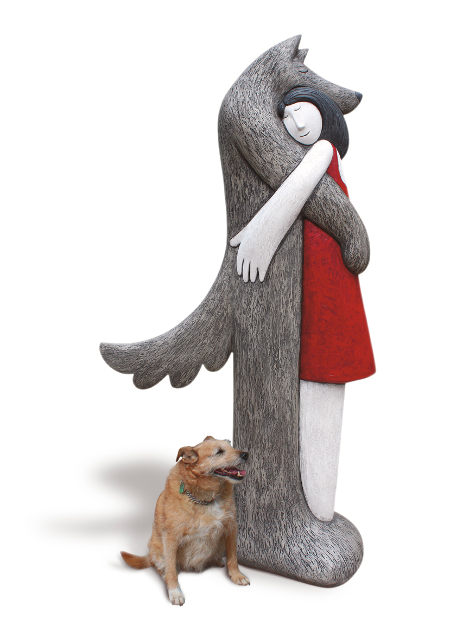 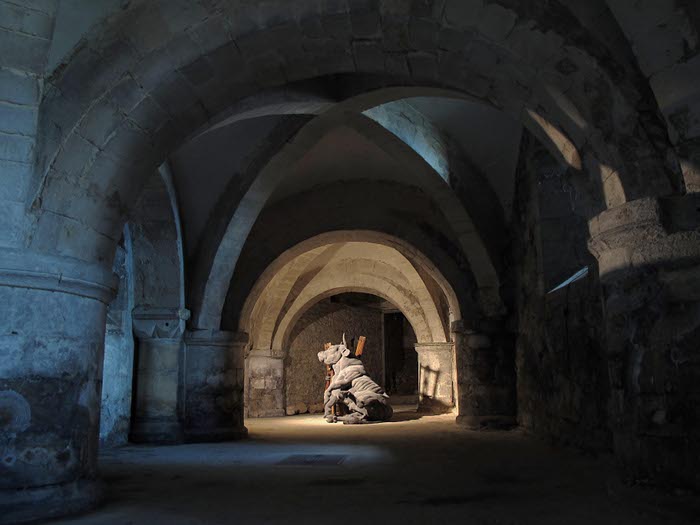 There’s something palpably sorrowful about Dorcas Casey’s creatures. Sculpted from a huge variety of materials, including layers of fabric, they slouch and sag, protrude from unlikely vessels, and gaze at you as though they’ve been rescued from a cruel and peculiar zoo or farm, but now don’t quite know what to do with their freedom. Encounter one in a crowded gallery, and you’ll find they lounge in a friendly but slightly bemused manner, as though to say, ‘What now? Why all these people, staring?”

“Making art is something that’s always been part of my life – I’ve never questioned it really, I’ve just always done it,” says Dorcas. “I’ve developed more sophisticated ways of articulating my thoughts about my work over time, but the core things I’m interested in haven’t changed.”

The animal sculptures have been part of Dorcas’ work for almost longer than she can recall. “I sometimes think that they are a sort of language my psyche adopts as an embodiment of emotions,” she says. “My dreams are always full of animals and these potent images in dreams are what form the inspiration for my sculptures now. I experiment with a huge variety of materials and found objects in my work but recently fabric has become my main sculptural medium. I love the way it stretches and folds like muscle and skin – it translates quite naturally into anatomy. I’ve also been using Jesmonite resin and metal powders as a means of solidifying fabric whilst preserving its subtle textures.” 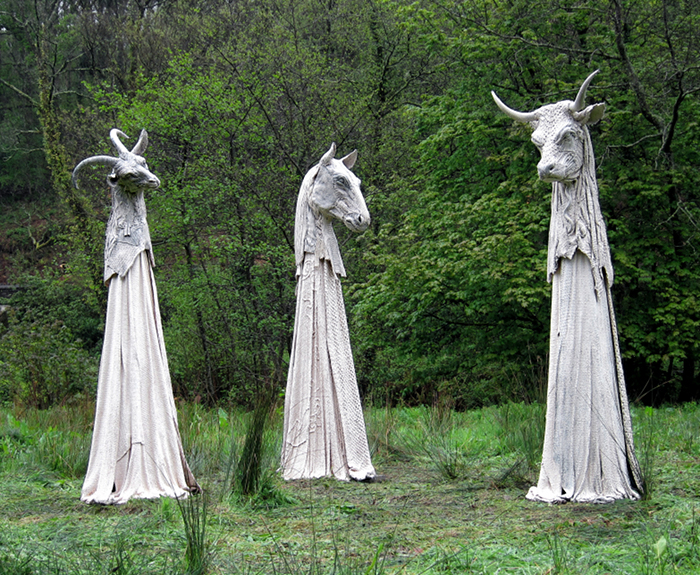 The initial impulse for a new piece of work seeps up from Dorcas’ subconscious, often in the form of a dream. “I start with a dream image – always an animal – and then just start making,” she says. “Working in fabric means I can keep the piece flexible and pose-able so I don’t have to make any big decisions about composition before I start. I work quite quickly and intuitively, and often combine the figurative elements of my work with found objects like old furniture to resolve the piece.”

Examples of this include Sewing Box, the striking artwork shown below. “I love the process of making and the surprises it throws up,” Dorcas says. “It’s always a genuine challenge and this is what keeps me interested. I love being able to give form to feelings which would otherwise be impossible to describe.” 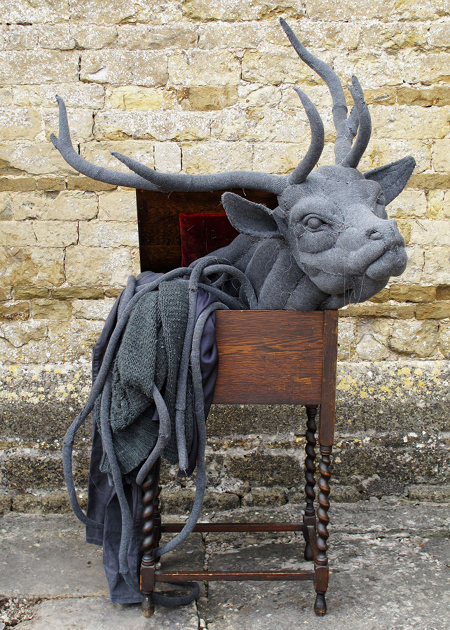 The animals are exhibited in a variety of unlikely setting, each of which contribute their own atmosphere to the experience of the viewers.

“I’ve shown my work in old attics, in derelict buildings, and I exhibited my bull sculpture in the crypt of Gloucester Cathedral,” says Dorcas. “These types of spaces really amplify the uncanny or unsettling aspects of the work. The crypt worked particularly well because a subterranean space seemed appropriate to an image from the unconscious and it imbued the Bull with a deeper mythological significance.”

The image at the top of this post shows Dorcas’ Bull in the crypt.

Working from dreams demands an unexpected level of realism from Dorcas. “Animals in my dreams appear very precise, in crisp detail,’ she explains. “I try to capture this by making the anatomy of the creatures in my sculptures very detailed and meticulous. With the materials I use, for example old gloves, jumpers, and bedding, I try to convey a sense of memories, perhaps that have been stored-up or hidden, and familiarity and domesticity. I hope to communicate a sense of uncomfortable tension between the homely materials I use and the unsettling animals I make.”