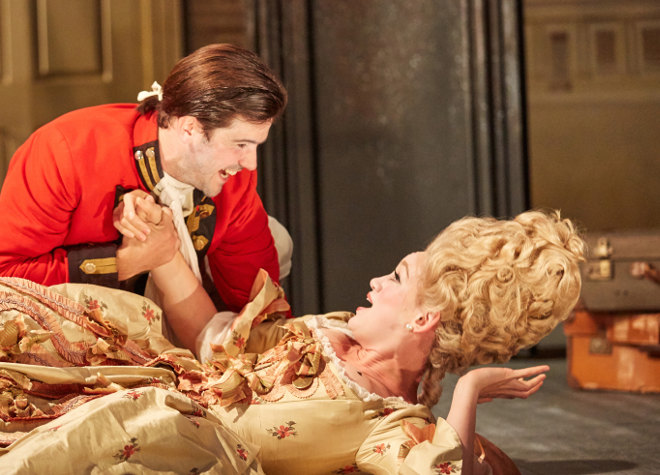 As part of its 250th anniversary celebrations, Bristol Old Vic is showcasing The Rivals, an 18th century comedy of pretence and frippery all in the name of snaring a spouse.

The play emphasises the vanity of late 1700s, with women sporting bustles and anyone of note wearing towering wigs, where social status is as much about the person your contemporaries believe you to be as who you actually are. 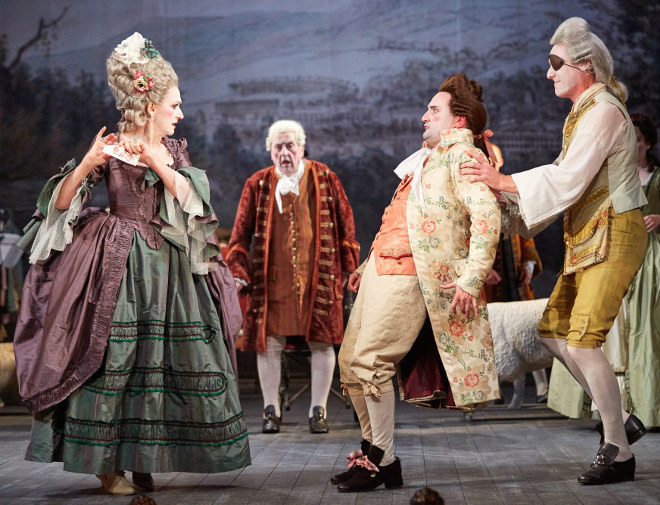 Enter Captain Jack Absolute (Rhys Rusbatch, a posh boy passing himself off as a penniless soldier in order to win the affections of the splendidly named (and splendidly performed by Lucy Briggs-Owen) Lydia Languish. One of the running themes of the play is the idea that reading can damage women’s minds, a fancy perpetrated by Lydia’s apparent brainwashing by romance novels into craving a life of poverty.

In addition to her affair with ensign Beverley, Lydia has unknowingly inflamed the desires of Captain Jack’s pal Bob Acres (Lee Mengo), while her maid Lucy (Lily Donovan) is passing love notes between her aunt Mrs Malaprop and Sir Lucius O’Trigger, the latter of whom she has duped into believing he’s receiving them from seventeen-year-old Lydia. 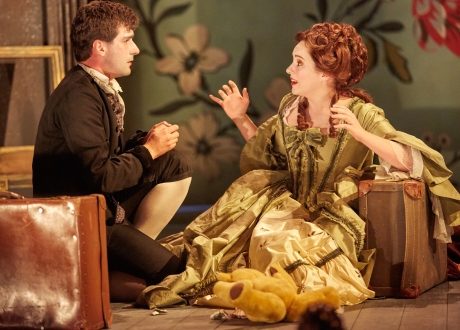 Nicholas Bishop as Faukland and Jessica Hardwick as Julia

Then there’s Faukland (Nicholas Bishop) who is in love with Julia (Jessica Hardwick), a straightforward match complicated by Faukland’s paranoia, which results in him testing his sweetheart’s affections until she is at her wits, and patience, end.

In short, all the ingredients of a delightful farce, set against the charmingly over-the-top opulence and theatricality of the era.

The set, designed by Tom Rogers, aptly conjures up the sense of a doll’s house, with oversized wallpaper prints and vast paintings of 18th century Bath. The impression of art, and artifice, is enhanced by a clever use of frames, from doorways to hollow mirrors – even the chair backs are left empty to provide additional glimpses.

Towards the rear of the stage, pianist Henry Everett provides suitably tinkly musical accompaniment to the scenes.

It all weaves together the atmosphere of a place and time full of passion, much of it woefully misguided.

Lucy Briggs-Owen as Lydia is comically adept, bringing modern-day teen melodrama to her character’s lines. At times in her fervour it looked as though her wig might take flight, while her ability to slouch and swoon her way around the set belied the constrictions of her 18th century garments.

Julie Legrand as Mrs Malaprop masterfully delivers lines packed full of misattributed words: at one point she urges her niece to “illiterate’ ensign Beverley from her memory, while at another praising Captain Jack as the “very pineapple of politeness.” In some sentences there are so many false words that the only way to get the gist is through Legrand’s effusive performance: the sentiment is always clear, even if the actual meaning has slipped awry. 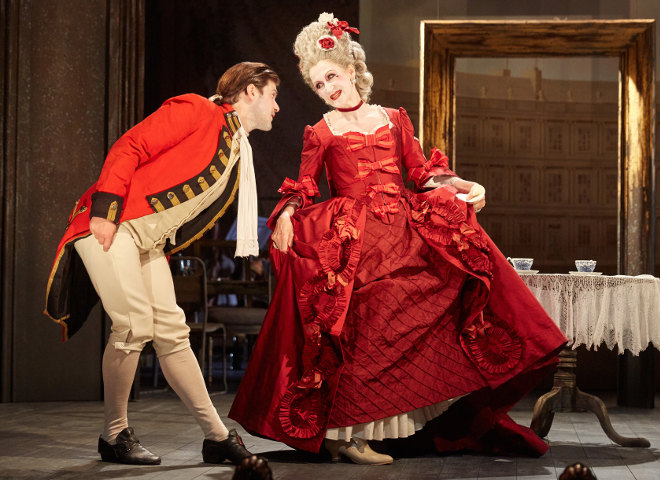 And yet, occasionally her word choices are particularly telling, as when she describes her niece as  “a deliberate simpleton.”

In Dominic Hill’s interpretation of Richard Brinsley Sheridan’s script, the gender divide becomes a shrewd part of the comedy. While the men thrust and parry their way through the show, the women get on with living, using the men’s underestimation of them as an advantage. Maidservant Lucy is making a fine extra income through sharing carefully selected eavesdropped morsels, while the ever-resilient Julia quietly prepares for every eventuality. Even Mrs Malaprop shows some astuteness when she recognises that Captain Jack’s “good-breeding” has not prevented him insulting her through letters written as ensign Beverley.

This is a play in which the men rampage as rambunctious fools, while regarding their women as air-headed children, while in truth the females steer every twist and turn of the plot. Quite simply, a really entertaining, understatedly forward-thinking historical show.

The Rivals is a Bristol Old Vic, Citizens Theatre and Liverpool Everyman & Playhouse and Playhouse co-production. It will be at Bristol Old Vic until 1 Oct  2016. Tickets from £9.50. Find details and book tickets.

All photos are by Mark Douet.

I’m always happy to receive reviews of books, art, theatre and film. To submit or suggest a book review, please send an email to judydarley (at) iCloud.com.