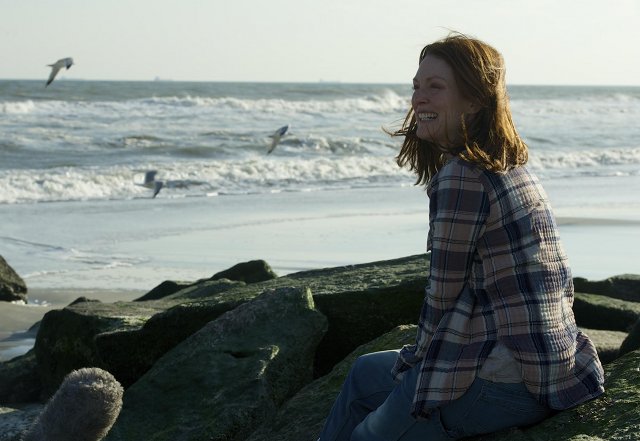 There are a lot of films out there about Alzheimer’s disease. Since my father was diagnosed with the disease I’ve been advised not to see several. The trailer for Still Alice, in which Julianne Moore’s character explains to her daughter (played by Kristen Stewart) how having the disease feels, intrigued me. But I wasn’t sure I had the nerve to watch it.

Having a parent, or any loved one, with Alzheimer’s, is like watching a gradual, unstoppable erosion. Sometimes it’s difficult to see what’s been lost, and other times it’s hard to remember what was once there. This film is an excellent reminder to live in the moment – because that’s all you can do.

I occasionally find postcards or emails from Dad that I’ve saved and recall suddenly his wit, his intelligence, his humour and emotional grace. He’s still here, and still full of passion for life, but he’s old in a way I never thought possible. He can’t always understand what’s said to him, and is often confused.

I think of the enormous conversations we used to have, the flights of fancy and the moral conundrums we’d explore, and realise how much I miss him. I think that’s important. I can give the him that remains all the love in the world, but I need to mourn the man already lost to us. And that’s hard, I think, for most people to understand.

Still Alice explains it far, far better than I can. My sister (who happens to be called Alice) suggested we go together, which deepened the experience and also opened up our shared but generally uncommented on experience of what’s happening to Dad, and, in reflection, to us.

We sat in the dark cinema and watched the on-screen Alice, only a decade or so older than us, begin to disintegrate. We saw her fear, and the dread of her husband and children. We watched her find moments of comfort and humour against lovely scenery, and we cried (quietly so as not to disturb other viewers around us) as she travelled the journey our father is still in the early stages of.

Regardless of whether you have any personal connection to the film, it’s a heart-rending, sensitively portrayed story well worth watching. Human beings are frail, but we’re also resilient, and Julianne Moore, in her Oscar-winning performance, gave the character a sense of realism that made me feel I knew her, and understood on some small level what she was going through. 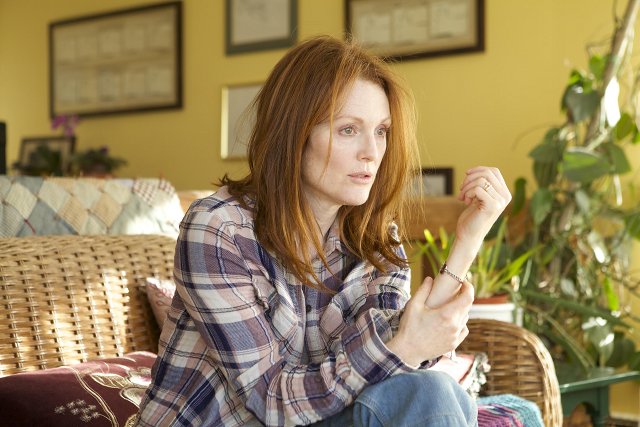 There are many moving scenes in the film, including some instances I recognised from my father’s behaviour, such as when she and her husband (played brilliantly by Alec Baldwin) go for ice cream and she echoes his order rather than ask for what she really wants. My dad does that, not always, but occasionally. It makes me realise how important it is that I try to remember what he likes, for the times when he doesn’t.

The standout scene for me, however (the one that made me sob onto my sister’s shoulder) was the one when she gives a talk at a meeting of the Alzheimer’s Association and, using a highlighter pen to follow her words, talks eloquently about her condition. She’s not suffering from Alzheimer’s disease, she corrects us, she’s struggling with it. It’s a delicate distinction, but a crucial one, and a reminder of the exhaustion that comes with each unfamiliar day.

Still Alice was a beautiful experience to share my sister. I’m glad to have seen such a powerful film, filled with stunning acting and cinematography, but more than that I’m glad we watched it together, because at the heart of it, this is a film about family, and about love.

Still Alice is available to watch at Watershed, who kindly supplied the images for this post, and cinemas across the UK