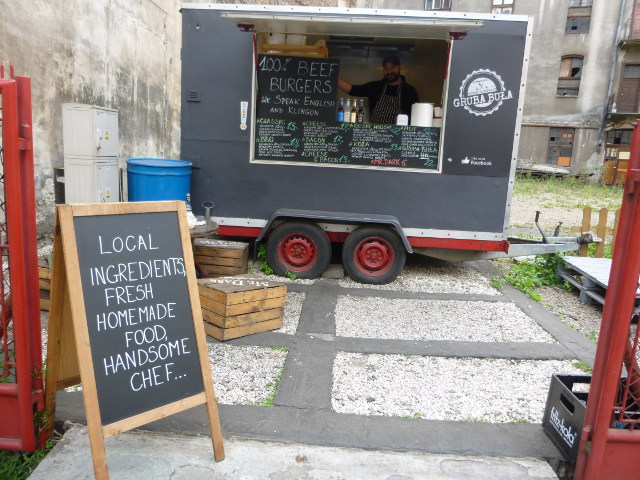 If you’re watching the current series of the Hairy Bikers’ adventures – Northern Exposure, you may already have an idea of what to expect from Poland’s cuisine. As befits a population accustomed to sub-zero winters, not to mention decades of regimes under the Nazis, then the Soviets, it’s easy to understand the hearty, occasionally hefty food. Most options are meat-based and seem designed to pile on pounds to safeguard against the next period of hardship.

Many of these dishes are delicious. Pierogi, Polish dumplings, are a highlight, crammed with ingredients ranging from cream cheese to venison. Bigos is also worth tucking into – this national favourite, also known as hunter’s stew, is packed with different kinds of meat and veg, and will certainly keep the cold at bay!

But for me, the finest meal in Krakow was in fact more familiar fare, and turned out to be the best burger I ever ate, courtesy of Gruba Bula.

We’d just visited the somewhat gruelling museum at Schindler’s Factory and had strolled back across the bridge into the Jewish quarter when a small van caught our eye. Set around it were enormous cable drums and crates being used as tables and chairs, and an enticing smell was rising into the air.

We decided it was worth the risk. 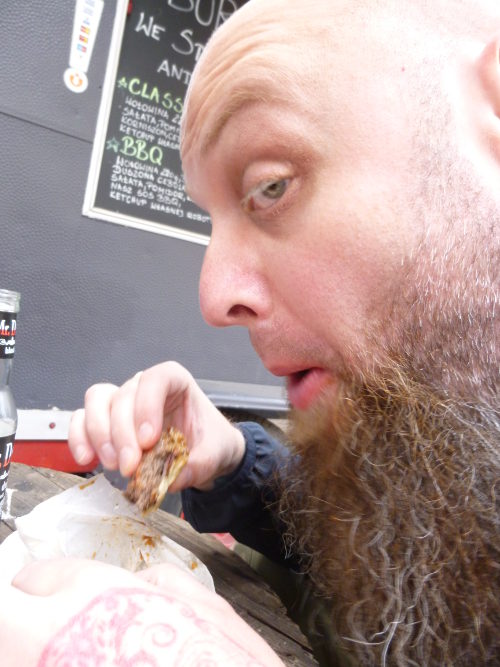 Oi, eyes off my burger!

The burgers were immense, tender, and spilling over with flavour. Each is deftly wrapped in swathes of grease-proof paper and there are reams of napkins to hand, but a hose-down might have been more appropriate. A clear sign of a top-notch burger, in my opinion. It’s a feast in a bun – and I’m not usually even that much of a burger fan. 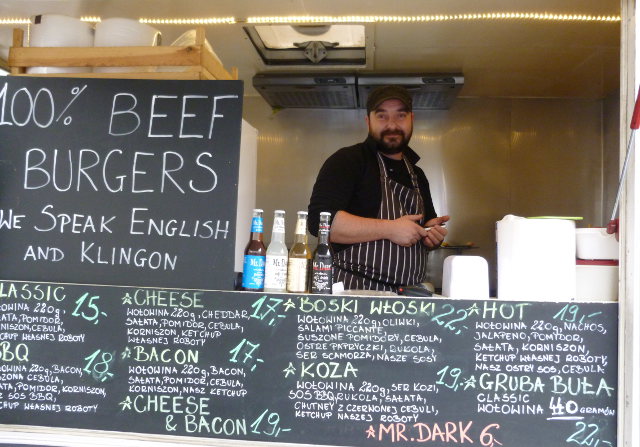 The smiley chef (who speaks Klingon as well as English, don’t you know?) adds to the sheer enjoyment of the experience. We’ll definitely be dropping by next time we have the chance to flit over to Krakow. Find Gruba Bula on Facebook at www.facebook.com/grubabula and give that handsome chef our warmest regards!