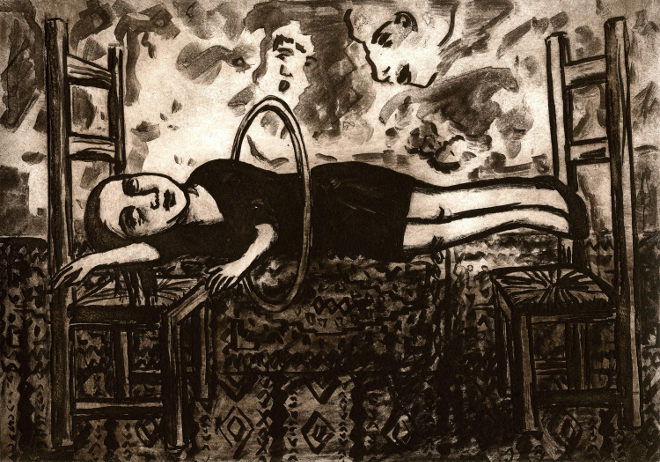 I encountered Debbie Lee’s extraordinary solar etchings, paintings and prints at the RWA Galleries in Bristol. Taking up almost a full wall in the downstairs gallery, it felt a little like having drawn aside a heavy velvet curtain and discovered a wonderful circus of the shadows taking place.

“I’m a visual artist based in Dorset, and work in paint, print and animation,” Debbie explained when I got in touch to find out more. “In recent years I’ve made a series of mini etchings which have been exhibited around the UK and in France and Spain. They explore themes of magic and illusion.”

Debbie has linked the artworks together using an imagined narrative and bound them into a limited edition artist’s book entitled ‘Tread Softly’. “I like the containment that a book offers and the intimacy of studying each illustration secretly. I’ve made larger paintings of these miniatures and I hope to exhibit the prints, paintings and book together.” 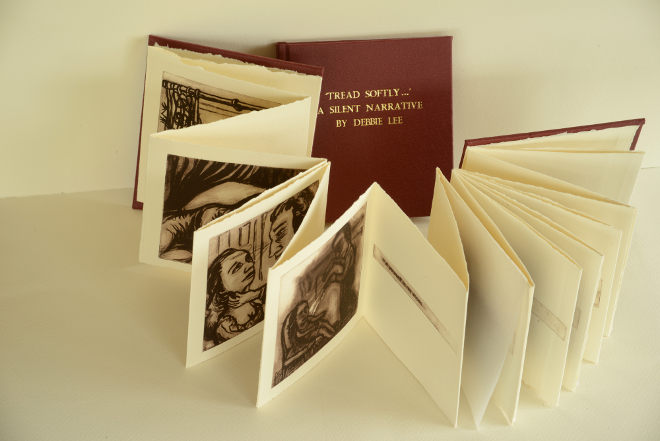 Debbie often works in print, and enjoys the social aspect of the print studio. “I sometimes invite other artists to my studio to print and share ideas while we work side by side,” she comments. “I have always made prints alongside my paintings and have visited many print studios during my travels to India as a commonwealth research scholar, as well as in Chicago and Tasmania. When I first moved to Dorset with young children, I found going to Poole print studio a great way to meet local artists and I have been teaching solar etching there for a number of years.”

Find out more about solar etching.

Debbie draws inspiration from “surrealism, outsider art and philosophy, psychological theories and fairytales. I like to paint on coloured Indian khadi paper. I am interested in the different process of working in miniature and large scale pictures. Sometimes I take a part of a miniature Indian painting and magnify it so that the brush strokes are physically present and the shapes become abstracted.”

Previously, Debbie worked as an art therapist with children, and still values this process in the work she makes today. “I will often start a number of pictures simultaneously, sometimes with my daughter making random marks on the paper, and exchanging the pictures between us working with large brushes and sponges which I later develop in my studio. I like the idea of developing attachment through drawing and painting with my daughter during this process.” 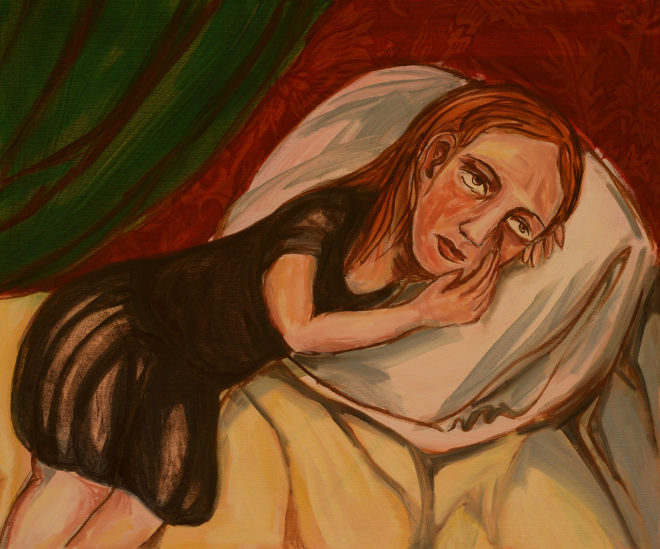 Debbie has also found support though joining creative parent projects. “We work together and encourage each other to retain our artistic practice,” she says. “Resources like this provide an archive of material for new creative parents to draw upon and a platform for parent artists to show artwork. Last year I was asked to contribute a creative piece of writing in celebration of grand mothering.”

In 2016 Debbie teamed up with other artists to experience collaborative ‘play’ on a massive scale at the Hansard Gallery in Southampton. “This has led to further collaborations with group members,” she enthuses. “Ideas from this experience evolved into a series of images offering a psychological inspection of women caught behind the scenes.” 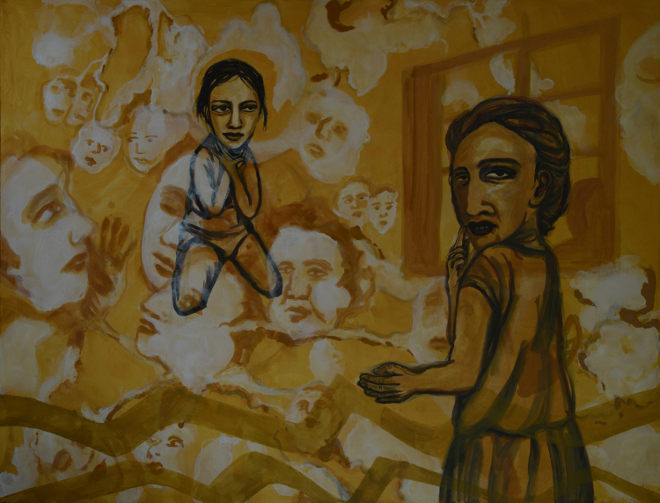 The body of work they produced was also influenced by the novella The Yellow Wallpaper by Charlotte Perkins Gilman, one of my personal unsettling favourites. “It charts the female protagonist’s attempts to manage altered mental states after childbirth,” Debbie says. “Isolated by her physician and husband and told to ‘rest’ her creativity, she hallucinates disturbing figures in wallpaper patterns.”

The series of artworks produced in response to the novella also ties in with the phenomenon of pareidolia, an intriguing topic that formed the basis of one of my recent writing prompts on SkyLightRain. “I projected wallpaper and invited the group to draw out images from the patterns and made a stop motion film of the process which inspired future paintings,” Debbie says. 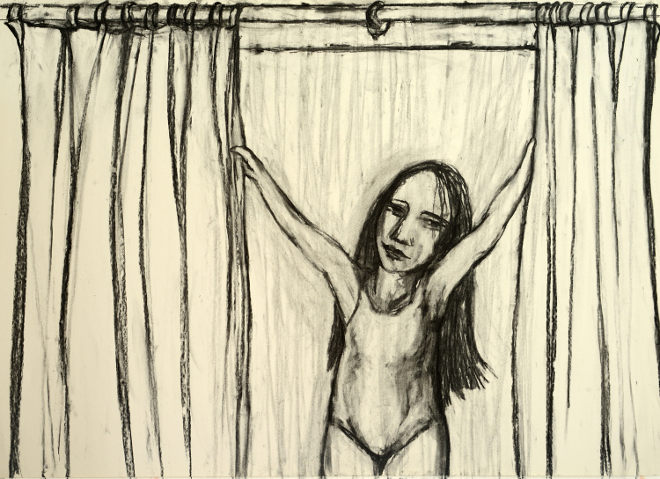 Exploratory play is key to Debbie’s imaginative process. “I like to experiment with animated drawings – drawing over one drawing and erasing it over and over to create the sense of movement,” she says. “I find this a satisfying way to bring memories to life using collected sound tracks and images. It has also been a good way to take my work to a wider audience and this year I have had my animations, including Drawn Curtains, screened in Chicago and at the RWA.”

These processes provide a foundation for Debbie’s larger paintings. “For me these are windows to my imagination (Sadness),” she says. “I enjoy the physical activity of working on a large scale and I enjoy the playful processes I go through to create them. I try to create a believable world from my imagination.”

You can see more of Debbie’s work and find out where she’s exhibiting on her website www.debbieleeart.co.uk.

Are you an artist or do you know an artist who would like to be showcased on SkyLightRain.com? Get in touch at judydarley (at) iCloud.com.