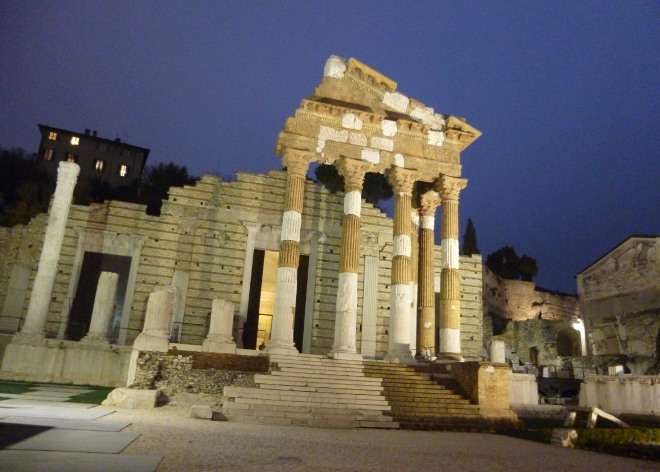 Located in the Lombardy region of northern Italy, not far from Milan, Brescia is a city favoured by Italian holidaymakers for its ancient streets, inspiring edifices and culture-rich surroundings.

Here are my top ten recommendations for Brescia. It’s not all about the pasta (though some of it inevitably is…)

Brescia has some impressive Roman sites, including ruins of several villas discovered beneath the nuns’ garden with the Santa Giulia museum and a rather striking structure called the Capitolium, a religious temple and theatre built in AD 73 by Roman emperor Vespasian. It was rediscovered in 1823 thanks to a single visible tower, the rest being buried far below the city’s present level. Today, you can hire special Smart Glasses that offer glimpses into history for an impression of past and present layered over one another. 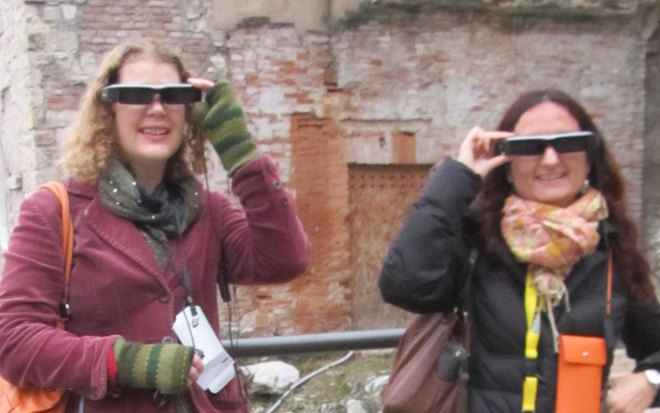 To me it brought to mind Daphne Du Maurier’s beautiful novel The House On The Strand, but others may find themselves channelling a certain time travelling Doctor’s sonic specs… 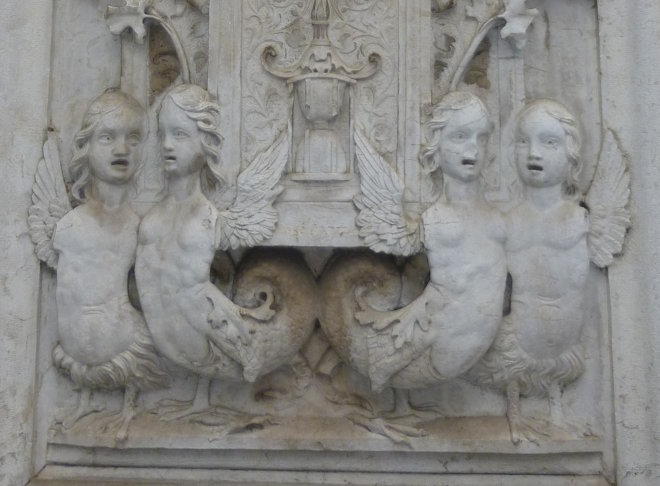 Brescia has a huge number of churches, (25 in the city centre alone) almost all of which are Catholic. One of my favourites is Santa Maria dei Miracoli, the exterior of which is covered with these extraordinary carvings. It’s worth taking a moment to eye up the mythical beasts – intended as warnings of the dangers that could befall you should you dare to stray from the faith. These mermaids are particularly foreboding, with their tiny wings and clawed feet. 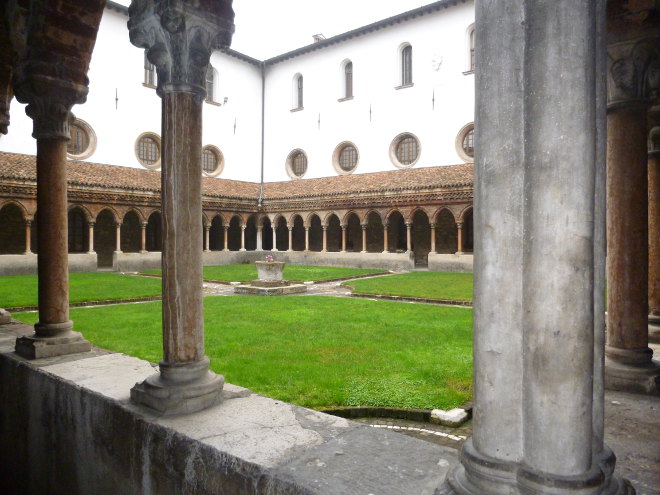 While fewer than the churches, there are plenty of convents to visit –even the city Santa Giulia museum is a former Benedictine monastery. This particular one is part of the San Francesco d’Assisi religious complex. Peaceful and austere, these sites provide the opportunity to stroll the walkways and courtyard while contemplating life, love and mortality. 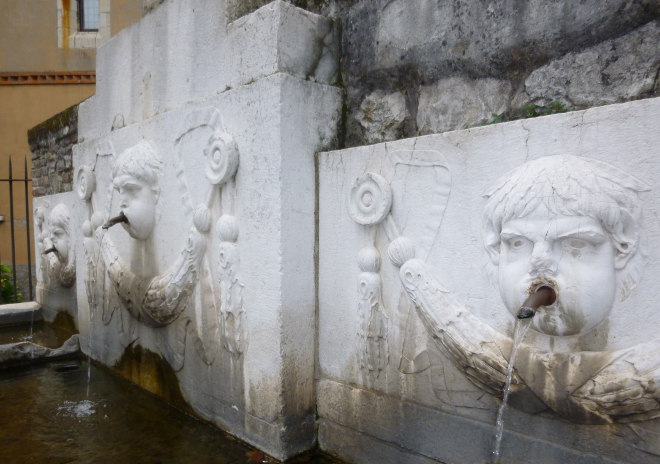 There are many – inside churches (occasionally swinging from chandeliers in a rather decadent fashion perhaps better suited to the Roman days of feasting), guarding the exterior gates of splendid buildings, and spouting with water from the ornate fountains. I’m not sure why they’re quite so numerous, but they’re amusing, in a slightly sinister way, and very photogenic. This fountain sits behind the church and convent of San Francesco in Piazetta dell Immacolata. 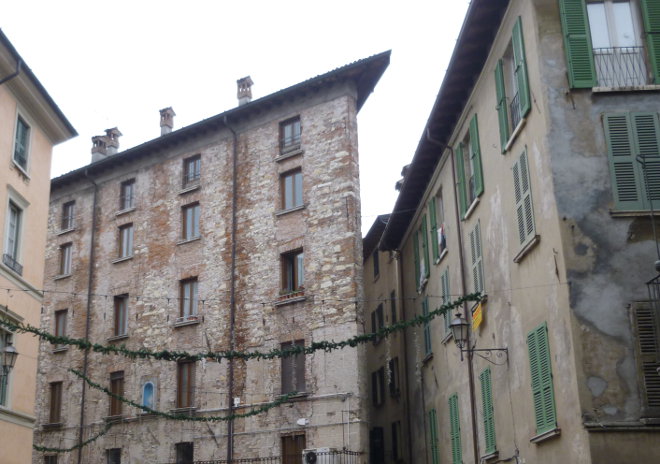 Brescia boasts examples of architecture from every era imaginable, including pre-Roman, renaissance and stunningly modern. One of my favourites, which resembles a ship about to collide with the facing building, can be seen down an alleyway northwest of Piazza Paolo VI. 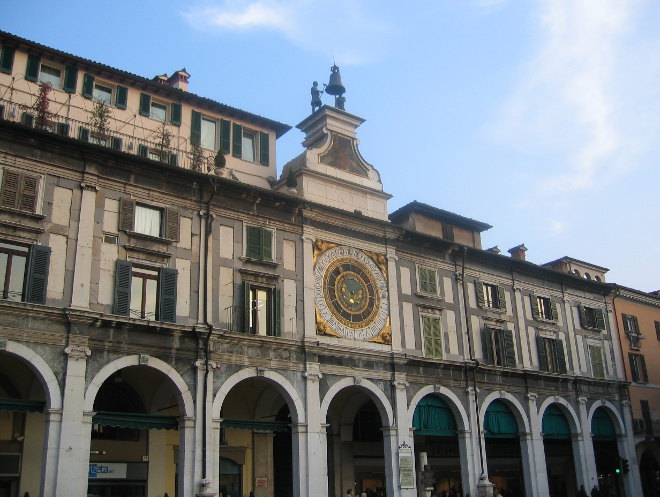 In the centre of Brescia’s beautiful old quarter is an elegant square named the Piazza della Loggia and flanked at one end by the Renaissance Palace of the Loggia – now the town hall – and at the other by the astronomical clock. Each hour (or, rather, a little while after – the clock is typically laidback about punctuality), two figures strike the bell atop with hammers to remind you to take your final sip of espresso and get on with your day. 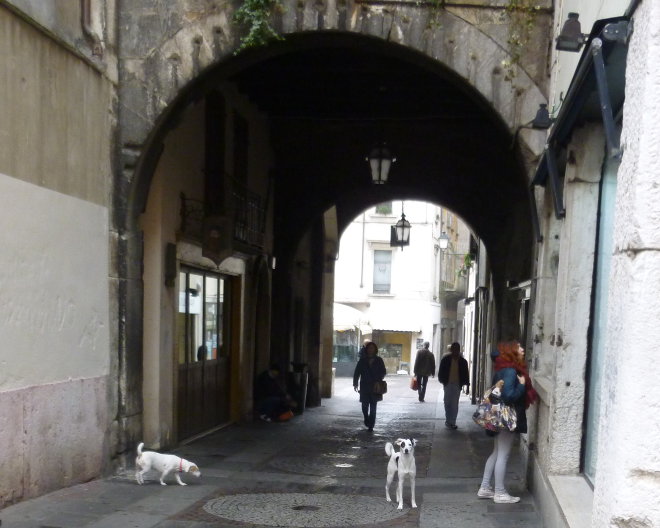 Many Brescia residents are incomparably chic, occasionally dauntingly so, but the dogs are always friendly. This said, be aware that cooing over and petting an Italian’s beloved canine will be greeted with as much warmth as though you’d ruffled their own painstakingly coiffed hair. 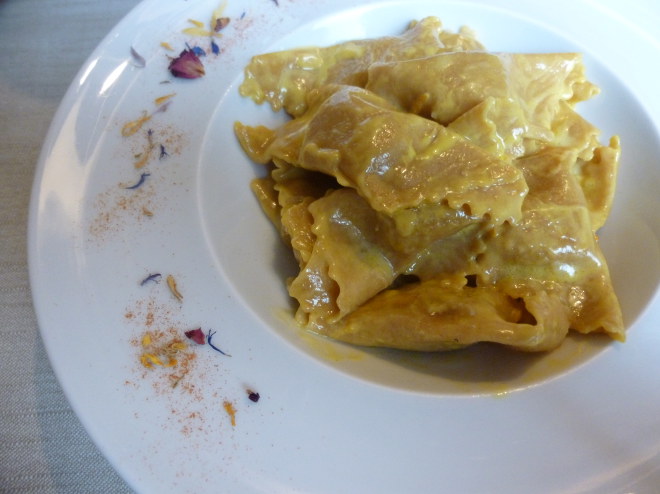 This typical local dish is like a form of ravioli made with paper-thin pasta, and stuffed with cheese and breadcrumbs, meat or vegetables. The ones shown here, served at former convent hospice Osteria del Savio, cradle pumpkin, saffron cream and are perfumed with orange. Not so much the peasant fare then. 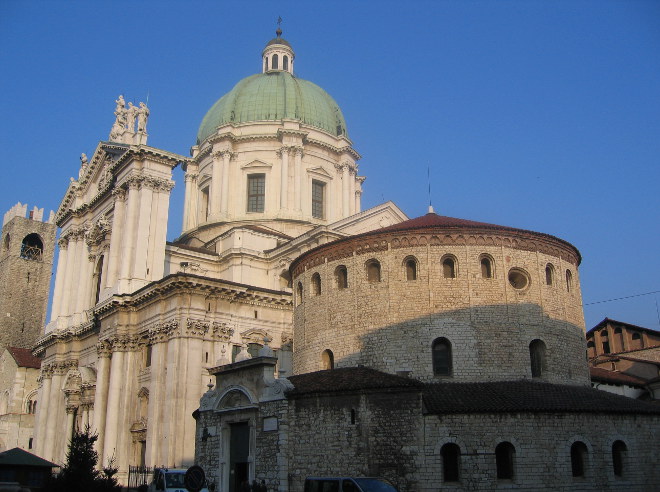 9 Compare the old with the new

Why have one cathedral when you can have two? In Brescia’s Piazza Paolo VI you can’t fail to spot the elegant white structure topped with one of the tallest domes in the Italy. Work on the Duomo Nuovo began in 1604 when it was decided the Duomo Vecchio, or old cathedral, wasn’t fancy enough. And yet, of the two, the old version, also known as the Rotonda due to its circular shape topped by a conical roof, is by far the more atmospheric. Build in the 12th century on the ruins of a former church, it has an entrance at street level with a flight of stairs leading down into the belly of the building, where services are still held today. 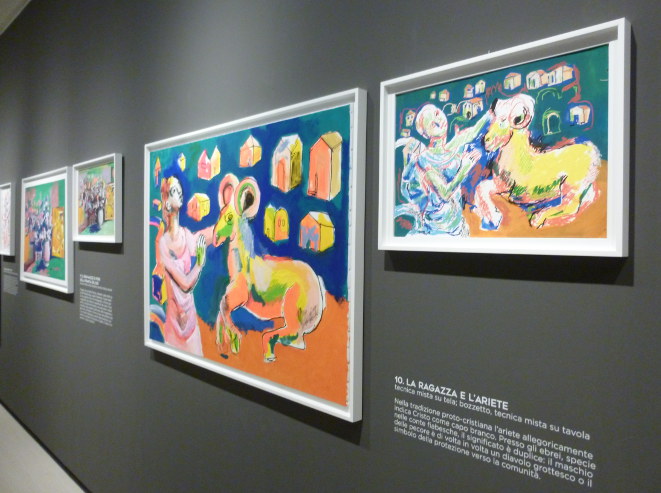 Within Brescia’s Santa Giulia museum, you can currently experience a dialogue between two creative greats – Marc Chagall and Dario Fo. The exhibition showcases paintings and sketches from Chagall’s childhood and early adulthood with response pieces created by his devotee Fo. Resembling scenes from colour-drunk dreams, the pairing seems like an artistic match made in heaven. The duel exhibition is on until 15 February 2016.

Discover more about Brescia at www.bresciatourism.it/en/