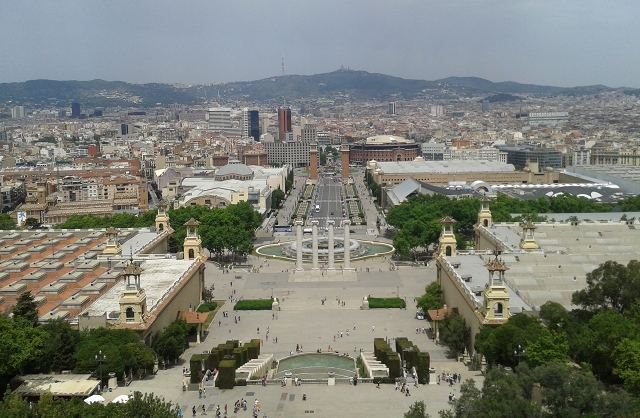 A few weeks ago I posted my Barcelona – 10 Ten Experiences piece. I travelled to Barcelona with my friend Beccy Downes, also a writer, and thought it would be interesting to show you how different two pieces written in response to the same trip can be. Here’s her piece on Barcelona.

Anyone visiting Barcelona will have heard of the work of Gaudi, and there is no doubt that the Sagrada Familia and Parc Güell are unique and stunning to visit.  But what else is there?

For a quick break in Barcelona, the ‘Hop On, Hop Off’ Bus Tours are perfect.  Faced with the challenge of seeing as much as we could in three days, I found that the commentary really helped me to focus, not only on what I had intended to see, but on the things I enjoy that hadn’t even occurred to me to seek out.  The tours all start at Plaça de Catalunya. 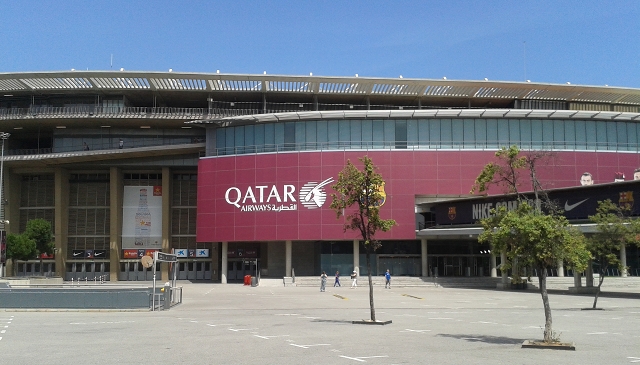 As a football and sports fan in general, I relished the chance to see the impact that sporting events have had on the city.  Having regularly seen and heard about the famous FC Barcelona on the TV, Camp Nou was an obvious early stopping point.  I was immersed in the culture of this football club when first stepping through the gates; in awe of the surroundings which encapsulate the 98,787 seater stadium, a village of eateries and merchandise stores line the approach…player and sponsor images adorn the outside of the stadium itself, although there are a few statues and plaques which pay homage to the club’s auspicious history too… 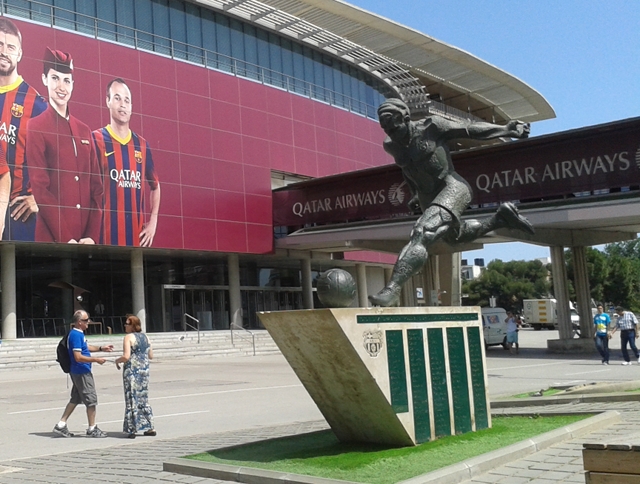 A stadium and museum tour is available for fans of both the club, and wider football in general.  It currently costs €23 for adults, €17 for children aged 6-13 (price taken from Club website) and includes the pressroom and commentary box, the trophy room, and even the players tunnel and dressing room. I didn’t have time to try this out, but if the official club shop is anything to go by, it promises to be a Barcelona FC-themed assault on the senses! 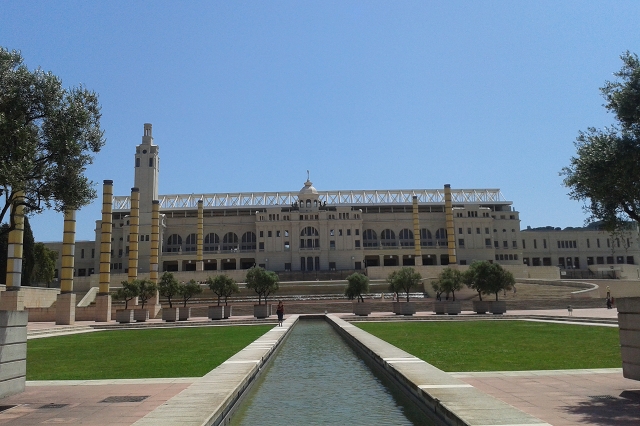 Another stop on the bus tour takes you up Montjuic (which has its own story – you’ll hear it on the commentary) and to the site of the great 1992 Olympic Games. Although I was fairly young at the time, I can still remember being stirred by the Freddie Mercury and Monserrat Caballe song which became the theme for the Games, and when I caught sight of the sheer magnificence of the stadium, I felt a slight tingle as I imagined what it might have been like to stand there surrounded by the thronging crowds… 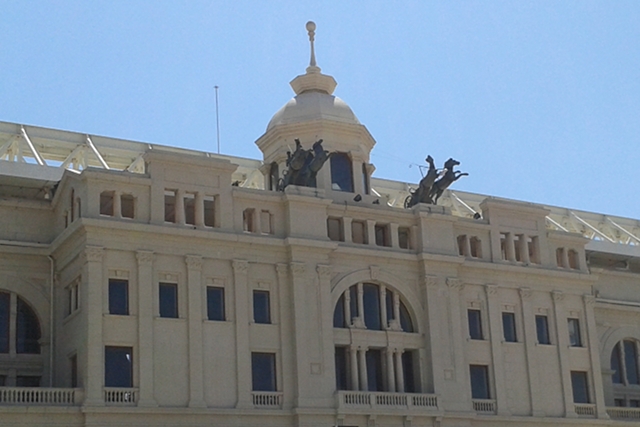 The ambience, even on a quiet day, is majestic – from the horses leaping from atop the stadium wall, to the layers of fountains flowing on three levels below the stadium, I spent some time just taking it all in…with the impressive telecoms tower designed by Santiago Calatrava to resemble the Olympic flame looming above. 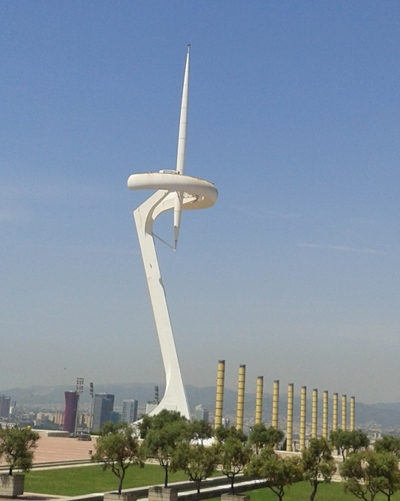 Another stop on the bus tour, which I had no idea was even there until sheer awe of the view made me disembark, was the Museu Nacional d’Art de Catalunya (MNAC). Even if art is not your thing, the two Venetian style towers that flank the approach, the fountains which dance in front of the museum (I didn’t get the chance to see them at night but the night bus tour takes in this experience during summer for an additional cost) and the view of Barcelona from the very top of the hill directly outside (see top of post), makes the climb very much worthwhile. There are escalators to help if you find walking uphill a bit difficult. 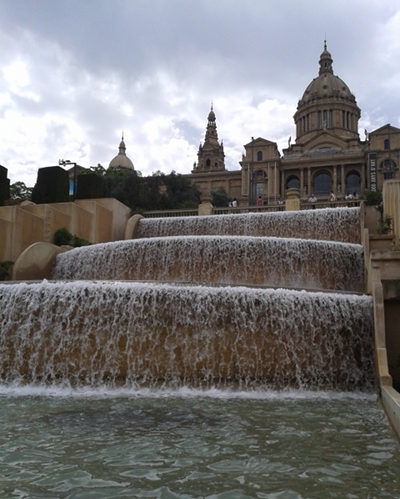 And of course, something that you might forget when visiting Barcelona, believing it to be the ultimate city break, is that it’s actually pretty darn close to an absolutely superb seafront. The hotels and casino which make up the Port Olimpic marina were built in readiness for the Olympic Games (the sailing events took place here and the athletes stayed here during the games), but some of the accommodation has since been sold as high value apartments to residents of the city – a lot of the architecture here, as with many of the buildings around the city, is unusual to say the least, and there’s some outstanding artwork too, including Frank Gehry’s giant goldfish! 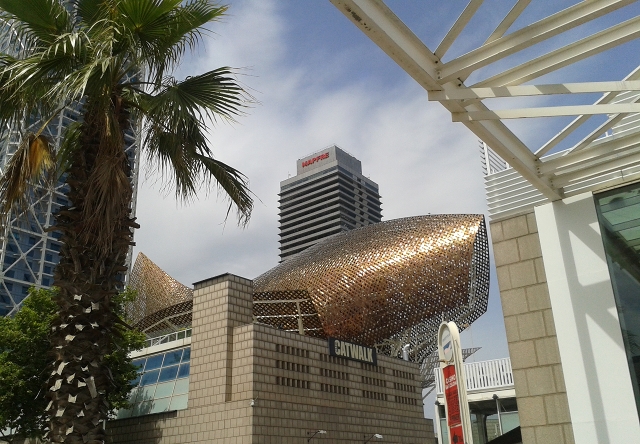 And finally, the nearby Barcelonetta beach is the ideal place to take the weight off your weary feet, feel the warmth of the Spanish sun and enjoy a cocktail or two. ¡Salud! 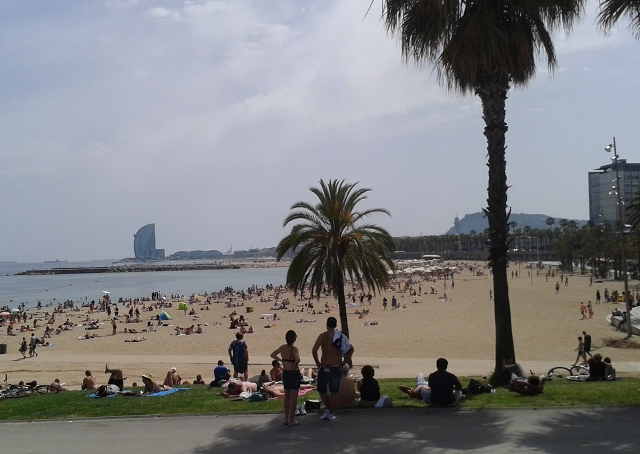 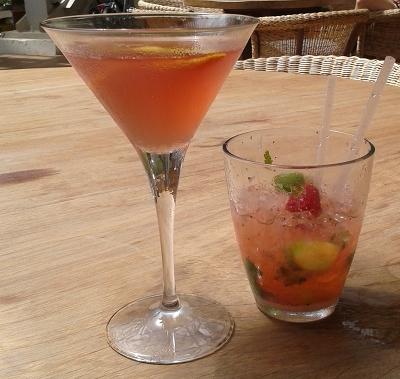