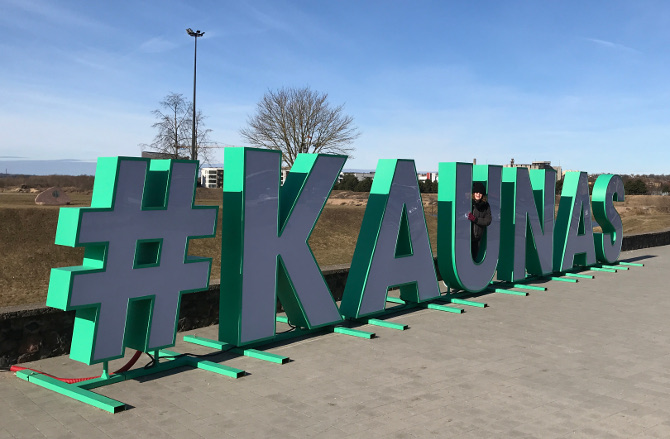 Our first full day in Kaunas, Lithuania, was flooded with bright sunshine and brilliant blue skies, so we took the chance to follow one of their excellent tourist maps, Wallographer’s Notes.

Street art began to emerge in the city as a form of protest during the years of Soviet Occupation from 1944 to 1990. Today, the City Municipality regular invites applications of ideas for new artworks, and so every month new creations appear. Here are ten of my favourites. 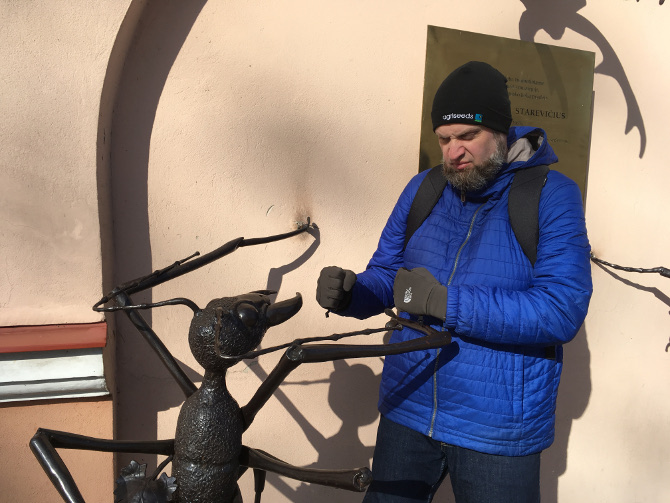 1. Insects of Ladislas Starevich
Rotušės Aikštė, 15, Kaunas
If you begin at the town hall, you will soon happen across this trio of gigantic insects: an ant, grasshopper complete with violin and stag-beetle created in honour of pioneering puppet animator Ladislas Starevich. 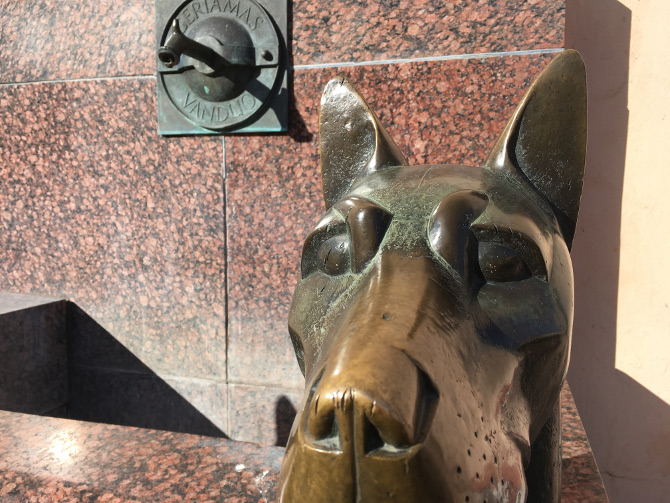 2. The Dogs’ Fountain
Rotušės Aikštė, 19, Kaunas
Created by sculptor Vytautas Narutis in memory of the canine guardians said to protect the sleep of emperor Napoleon when he stayed in Kaunas Old Town, Fontanas Šunys (Dogs’ Fountain) was installed in the Kaunas Town Hall square in 1987. The dogs have lovely friendly faces rubbed shiny in places, presumably from people patting their noses for luck. 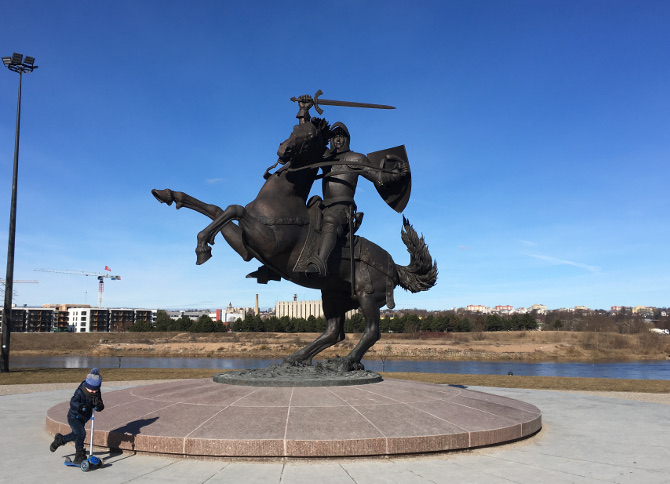 3. The Freedom Warrior
Pilies G. 17, Kaunas
Located between the 14th century Kaunas castle and the Neris River, this exuberant statue is named the Freedom Warrior. The figure of the armour-clad knight on horseback mirrors the one of the city’s heraldic shield, known as Vytis. It stands an imposing seven metres high. I love its celebratory air, but feel its triumphant air is rivalled by the tot scooting around the monument’s base in my shot. 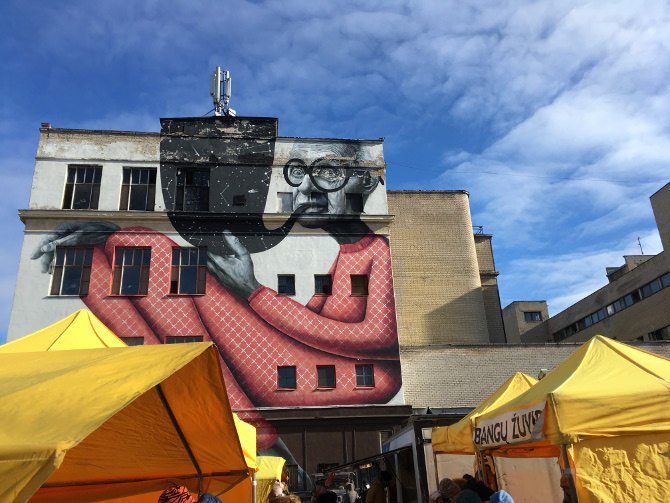 4. The Wise Old Man
Jonavos G. 3, Kaunas
Turn to the right with your back to the castle, and you’ll spy The Wise Old Man, or The Master, a gigantic portrait smoking a pipe apparently in his pyjamas. We visited on a Saturday when the square below was laid out with stalls selling freshly unearthed root vegetables, cheese, honey, cured fish and the eponymous tree cakes. The 440 m2 creation by artists Tadas Šimkus and Žygimantas Amelynas overlooks it all with a benevolent air. Ironically, he’s painted on the side of a former footwear factory, and though you can’t see his feet in this photo, he has no shoes. He’s said to be an homage to George Maciunas, one of the pioneers of the Fluxus art movement. 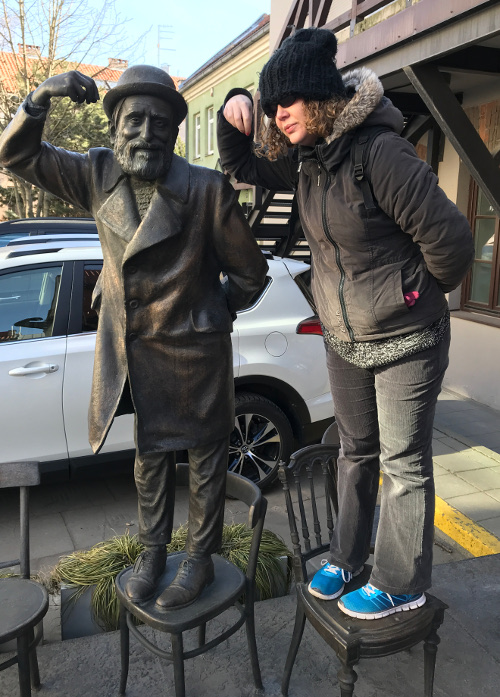 5. Monument to Abraham Mapu
Mapu G., Kaunas
This jaunty chap stands on a chair inthe courtyard of the Ars et Mundus Gallery. He is the sculpture of a beloved Kaunas-born author,Abraham Mapu, who is credited with writing and self-publishing one of the first Hebrew novels in 1853. I love the cheeky character sculptor Martynas Gaubas has achieved. With his hand held just so, he looks about to doff his cap in greeting. 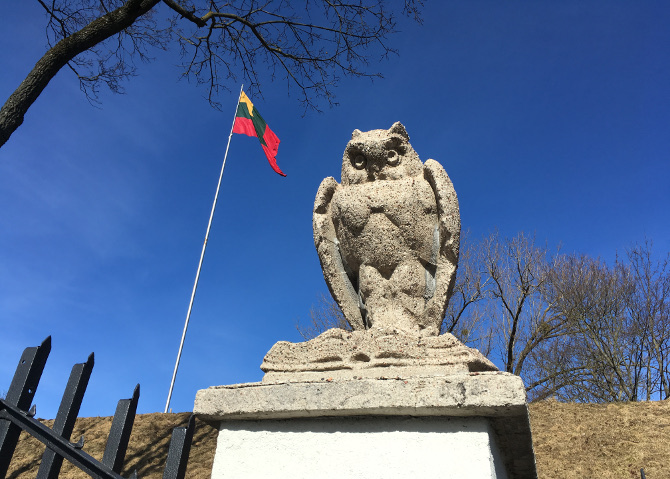 6. A whole flock of owls
Pelėdų Kalnas, Kaunas
These concrete and sand owls mark the perimeter of Pelėdų Kalnas, or Owl Hill, and were created by sculptor Vincas Grybas in 1922. The owls are the symbols of Kaunas Art School, the hill and the city below. 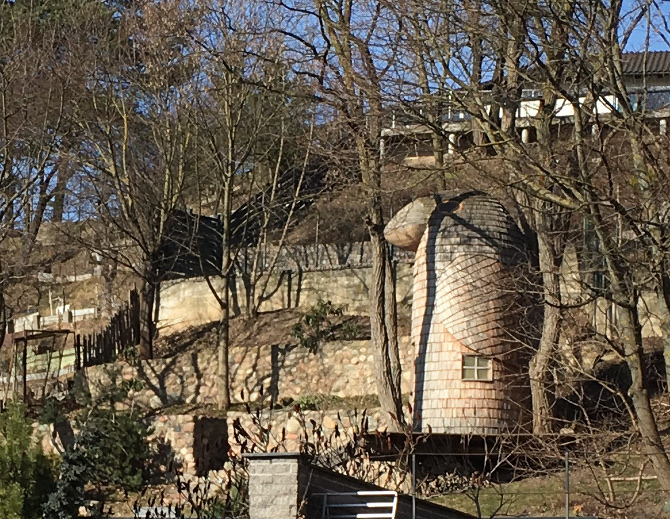 We followed tourist map to visit the owls, but spotted the above en-route to Owl Hill. What is that? An owl-shaped building?! So fabulous. Wonder if it’s on AirBnB, 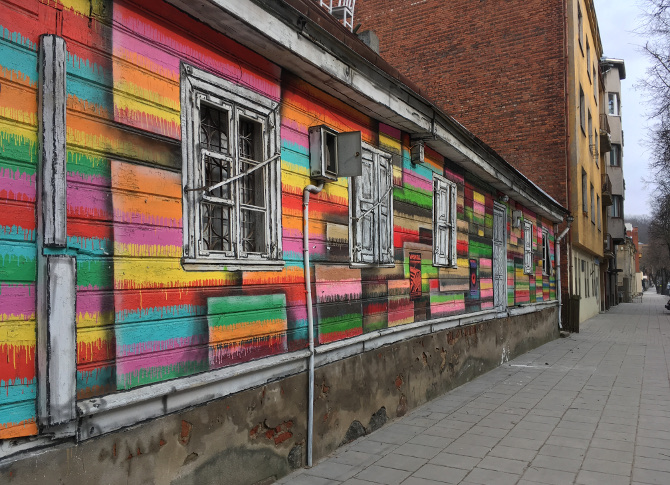 7. The Cabin
Putvinskio G. 36, Kaunas
This gorgeous rainbow building springs out of its surroundings as a reminder that art rests on every corner of Kaunas. Once an abandoned and weather-beaten house, it’s now a vivid slice of life set almost midway between the Devil’s Museum and the Žaliakalnis Funicular (which was closed when we visited, with no explanation as to why). There are two chairs on the cabin’s roof, perhaps in case the devil or his wife fancy a rest. 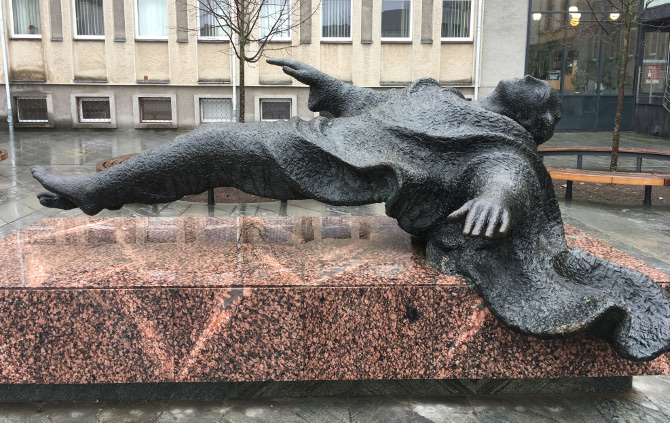 8. The Levitator
Nepriklausomybes Aikštė, Kaunas
Situated close to St. Michael the Archangel’s Church, this sculpture resembles a miracle caught in mid-moment, as a figure rises, harnessed to its long-locked plinth only by a swathe of cloak.
I’ve since seen photos of children pressing themselves beneath the hovering body, but when we saw it rain poured down and all that caught there was the suggestion of clouds. By the way, apparently the Lithuanian word of Levitator is levitatacija. Beautiful. 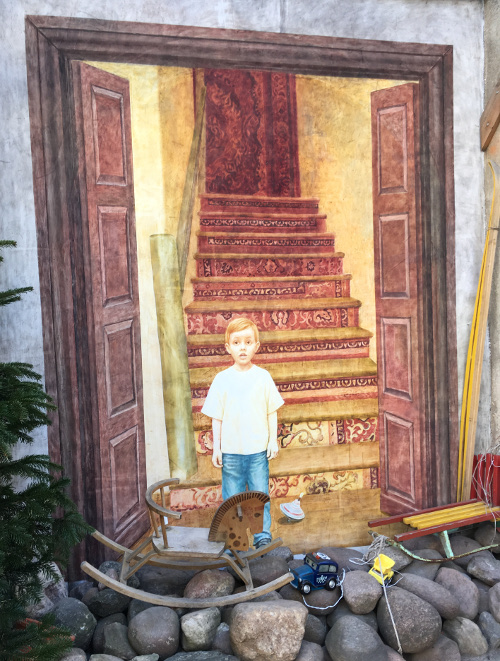 9. Yard Gallery
Ožeškienės G. 21A, Kaunas
Begun in artist Vytenis Jakas more than a decade ago, the Yard Gallery is a constantly evolving creation, with new artworks being added by a range of artists, neighbours and passersby all the time. It aims to bring life and a sense of community to this space surrounded by residential homes. An astonishing space crammed with evidence of narrative and imagination. 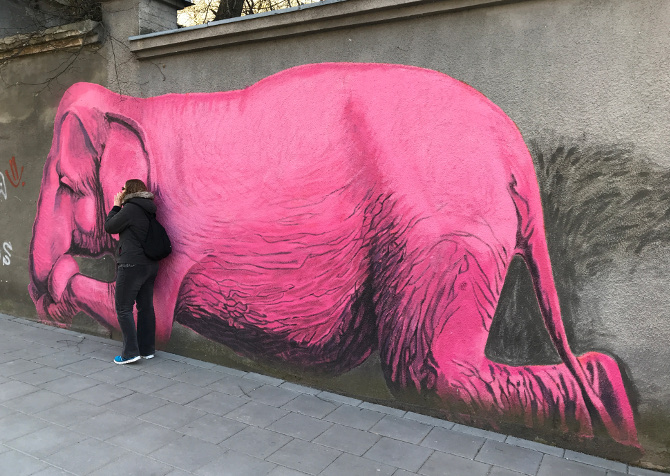 10. The Pink Elephant
Ožeškienės G. 18A, Kaunas
Just up the hill from the Yard Gallery, you’ll find a vast, resting elephant depicted in power pink. That large ear seems ripe for secrets, better than any church confessional. It’s by artist Vytenis Jakas(yep, him of the Yard Gallery, and to me seems to represent all things joyful and accepting in this quirky creative city. It was actually inspired by a graffiti slogan that translates as Love Conquers All.

Find out more about Kaunas, Lithuania, at visit.kaunas.lt/en/ 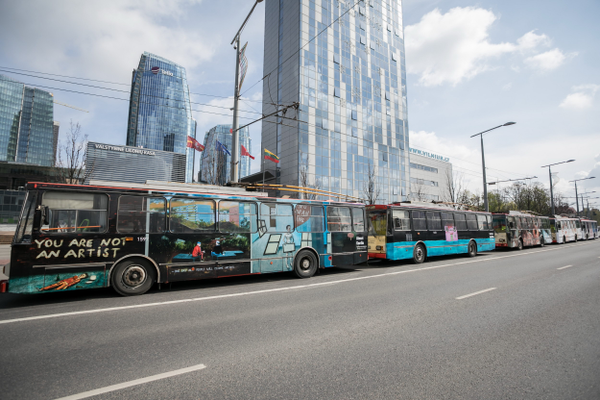 Have you ever taken a journey on a piece of art? Now you can take an epic ride on one of Vilnius’ trolleybuses covered in contemporary art. Running for the second consecutive year, the Painting Routers art initiative has transformed five trolleybuses into Vilnius, Lithuania, into canvases painted on by five teams of well-known young artists from Lithuania and Estonia.

“The novelty of using public transport as art lies in the subjectivity of painting and its corporeal and incorporeal duality rather than  in the trolley’s medium as something new and unexpected,” explains the project’s coordinator Darius Jarusevicius. “The aim of Painting Routers is to question the stable  identity of painting and the sustainability of its corporeal actualisation, and to highlight the nomadic nature of art.”

The idea of Painting Routers sprang from art duo Polyrabbit.Duplicate (Inna Shilina and Darius Jaruševičius). “Our painterly practice is based on duplication and the repetition of our own paintings on different mediums: animation, digital  appearance, corporeal surfaces with very different densities and situations of exposition,” says Darius. “It was a dream of the Polyrabbit.Duplicate duo to find means of creating visual art in non-static public spaces. When we hit on the trolleybuses was the answer, it became clear that it would be good not only for our own painterly practice, but for contemporary painting in general, so we invited more artists to join in.” 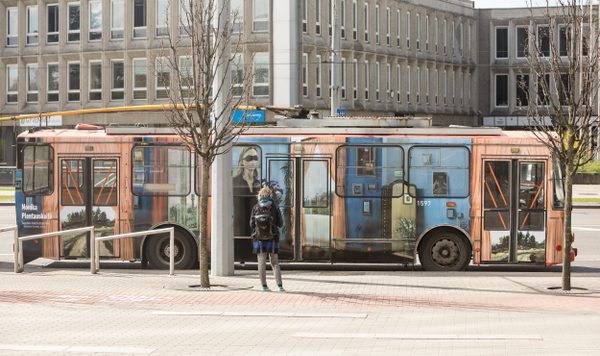 This year’s Painting Routers initiative aims to encourage dialogue on the #metoo movement, femininity, sensations, and sexuality. “A real-life social media wall will revert back to digital when people share their experiences of the Painting Router works, creating a cycle,” says Darius. “Taken out of the galleries, the art becomes accessible to everyone.”

The trolleybuses will be riding  the streets of Vilnius until October 2018, offering plenty of time to spot all five works and ride each one as the mood takes you!

More information about the project and about tourism in Vilnius visit www.vilnius-tourism.lt/en. 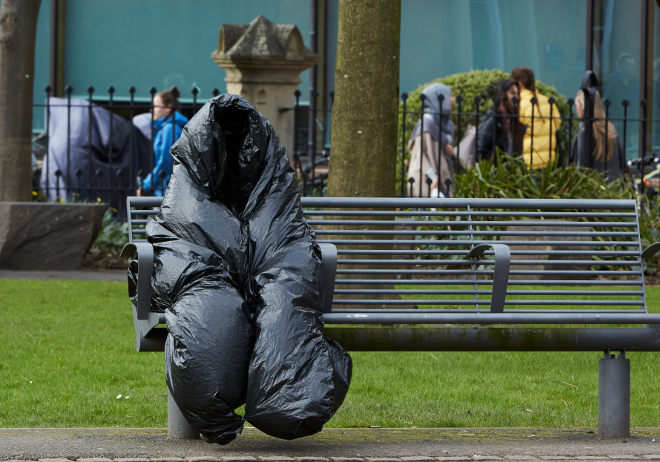 Have you visited Manchester recently? If so, you may have encountered an unsettling figure or two. Made from black plastic bags, the Hello Hollow sculptures by artist Julian Hetzel descended on the city in March.

Shifting subtly in the wind and eerily anthropomorphic, the figures are designed to be “short-lived and changeable.”

Hetzel describes the sculptures as interference. “People get confused because they don’t know what they are seeing.”

One of the Hello Hollow sculptures with artist Julian Hetzel

He comments that in Manchester, more than anywhere else he’s taken them, including locations in Austria, the Netherlands and Germany, the reaction they’ve provoked is fear. It’s a detail he attributes to the city’s high incidences of homelessness. With their fragile ephemeral qualities, they raise questions about vulnerability, threat, and the perceived value of human life.

The installation is part of SICK! Festival, which aims to challenge the physical, mental and social challenges of life through art.