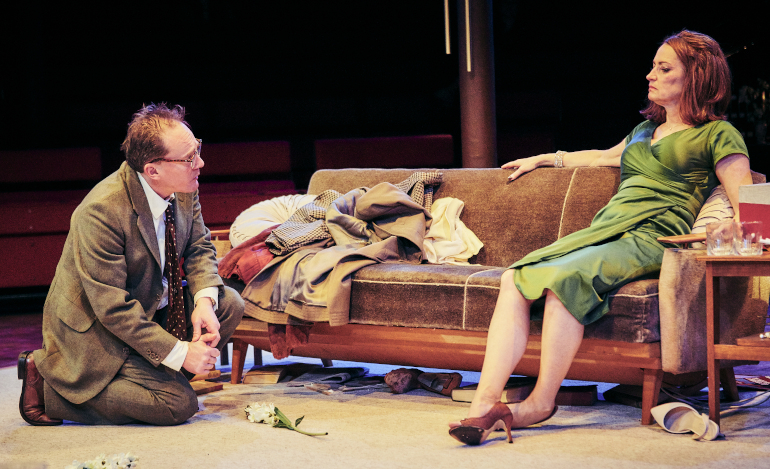 George and Martha invite Nick and Honey to join them for a nightcap. It’s way too late in the evening, but what do they have to lose?

So reads the description on the Tobacco Factory Theatres’ website, and the answer is really quite a lot. Dignity, trust and self-respect are just a few of the traits that will be ripped to shreds by the end of the three act, three-hour and 15-minute performance.

Martha (Pooky Quesnel) and George (Mark Meadows) are already deeply embedded in the academic community that Nick (Joseph Tweedale) and Honey (Francesca Henry) have just joined, so perhaps it’s natural that the younger couple accept an invitation for a post-party party at Martha and George’s. But even the hosts aren’t prepared for the toxic darkness of the games that unfold between the four players. 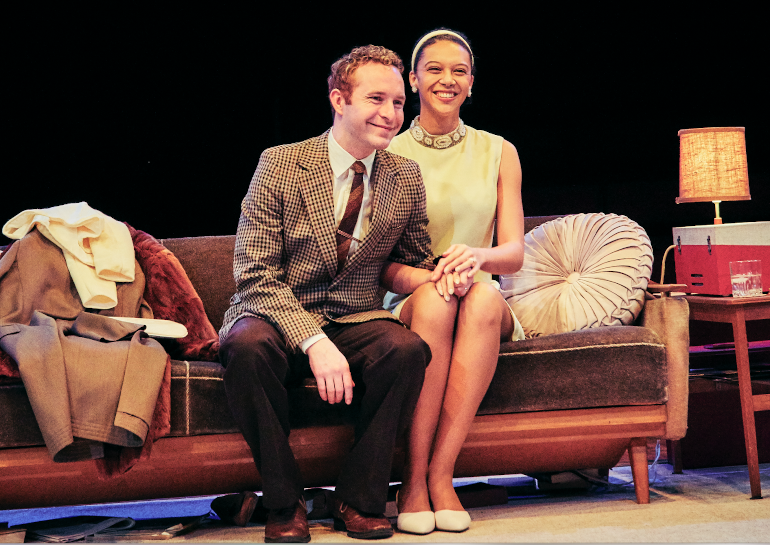 The drama is almost entirely semantic (despite some exuberantly comic dancing from Henry). In Who’s Afraid of Virginia Woolf?,  language is weaponised, and aimed to cause maximum damage. Director David Mercatali says “When I first read it, I couldn’t believe words could be so exciting.” His four-strong (extremely strong) cast make the most of Edward Albee’s scorching lines, veering from joyful to tearful and vindictive to protective on the head of a pin. At the heart of it is a couple disappointed by circumstance, and displacing that onto each other despite a deep burning love. Without the affection and evident flickers of adoration, the cruelty might be impossible to bear. 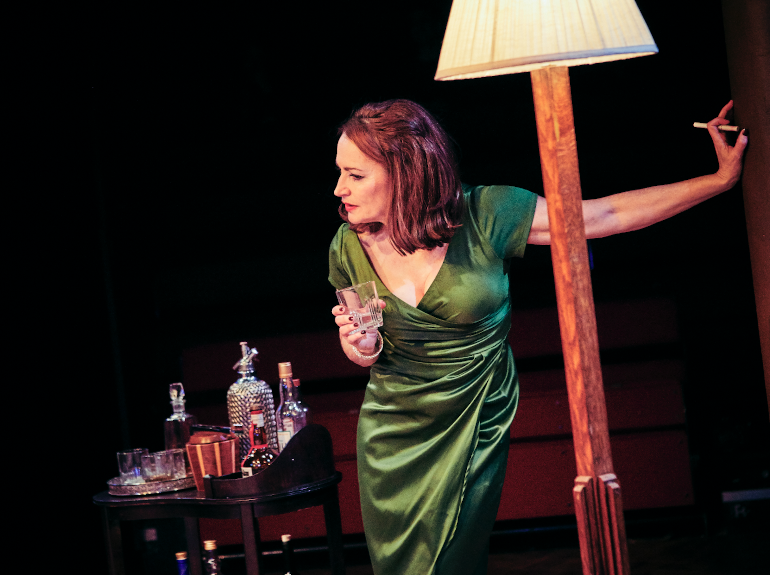 Quesnel eases us in with a double-feat of performing Martha doing an impression of Bette Davis, with a touch of Elizabeth Taylor thrown in. George already has his slippers on before she announces they’re expecting guests, delivering her first kick to George as he berates her for “springing things on me all the time.”

“In my mind you are bedded in cement up to the neck,” says George to Martha in an acerbic moment. “No, up to the nose, it’s quieter.”

The laughter, anecdotes and snarky remarks grow increasingly frantic as the booze flows and each individual makes admissions that they’ll most likely regret. A gun presents a joke and flowers become missiles while a broken bottle crushes to dust under their feet. The Tobacco Factory’s in-the-round space presents the ideal arena for the challenges, with Anisha Fields’ minimal set providing only the essentials – two chairs, a long low backed (thankfully – for those sitting behind it) sofa with books strewn beneath it, a side table with a record player, and a well-stocked bar. It paints the era without fuss, and keeps our focus on the couples.

Quesnel is startling and unnerving, veering from welcoming hostess to seductress to weeping child desperate for love. Meadows is equally adept, revealing George’s underlying rage in small parcels between entreaties and insults. Over the course of the play he refers to Martha as his “yumyum”, and a “cyclops” without missing a beat. And when Honey coyly asks to use the bathroom, George says to Martha: “Show her where we keep the euphemism?”

Tweedale’s Nick holds his own against George, defending both his own wife and Martha against the barbs that come their way, even as the alcohol reduces him to a jocular jock, leaning into the toxic tomfoolery. Henry’s Honey is keen to like and be liked by all, slipping in observations that strip away the veneer momentarily. Her comic timing lifts some bleaker moments into laughter, keeping us on the right side of this emotional juggernaut of a play.

It is long, and could perhaps benefit from having a few lines shaved off here and there, especially in act two. But it’s hugely enjoyable too. Even as you squirm in your seat for those on stage, feeling your own adrenalin heighten, you can’t help being aware of the glory of seeing sharp minds battle it out and wonder who if anyone will make it out alive.

A searing indictment of thwarted ambition, with deep sadness and enduring love at its heart. 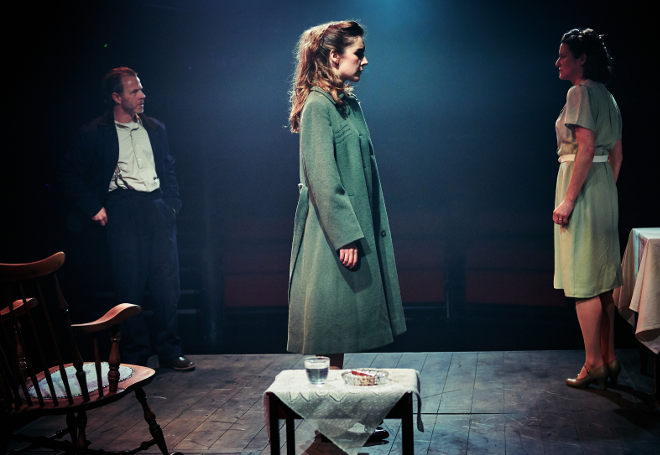 Arthur Miller’s powerful human drama examines the loves and loyalties that can threaten to destroy us, if we let them have their way.

In the second production from Tobacco Factory Theatres’ inaugural Company season in Bristol, director Mike Tweddle has forged a suspenseful examination of the layers that make up a family, and the forces, both internal and external, that can threaten it.

Eddie Carbone works tirelessly at the piers of 1950s’ New York to provide for his wife Beatrice and the niece, Catherine, he has raised as a daughter. 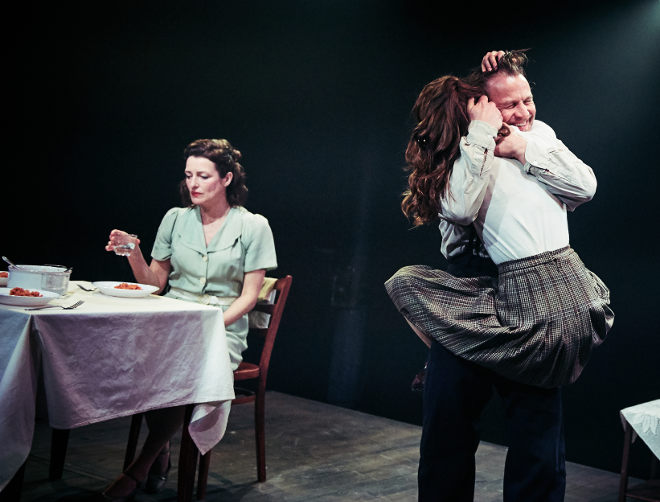 Catherine is seventeen, almost a grown woman, and Eddie’s protective side is struggling with the fact she’s increasingly attracting admiring gazes as she walks down the local streets. If he had his way she would remain a child forever. “Katie, you are walkin’ wavy! I don’t like the looks they’re givin’ you in the candy store. And with them new high heels on the sidewalk – clack,clack, clack. The heads are turnin’ like windmills.”

Actor Mark Letheren inhabits Eddie as a man seething beneath the surface, while projecting himself as a man at ease within his neighbourhood and adept at out-manoeuvring any difficulties that arise.

Everything accelerates when his wife’s cousins arrive from Italy as desperate illegal immigrants.

A distinctively pared-back set by designer Anisha Fields represents the Carbone home and dockside – with just a few blocks, chains and sparse pieces of furniture, a whole world is conjured. As meagre as Eddie and his fellow pier-workers’ incomes are, these are the wealthy relatives compared to those still in Italy, where jobs are so scarce that babies are fed water when they cry.

The two men who arrive couldn’t be more different, despite being brothers. As Catherine points out, one is as dark as the other is light. And as Eddie observes, “Marco goes around like a man,” while his brother, Rodolpho, played by Joseph Tweedale, prefers to sing, cook and sew – details that palpably discomfort Eddie.

Catherine, on the other hand, is instantly charmed. 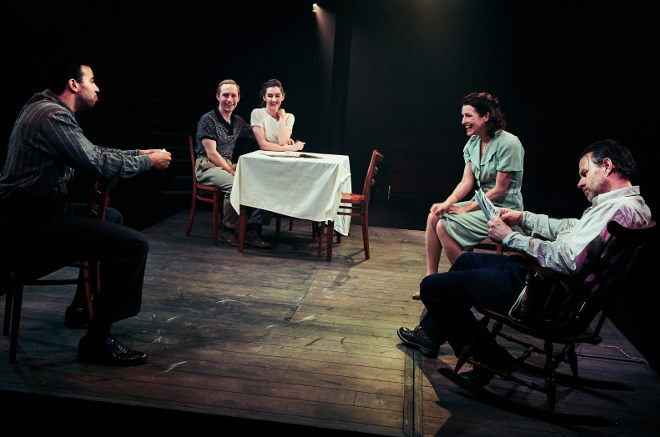 Laura Waldren, fresh from Bristol Old Vic Theatre School, is a delight as the beloved niece who unwittingly sets this story on its tragic journey. Lively and expressive, she portrays a young girl struggling to grasp the changing expectations of her. “It’s wonderful for a whole family to love each other, but you’re a grown woman and you’re in the same house with a grown man. So you’ll act different now, heh?” urges her aunt Beatrice (a beautifully nuanced role from Katy Stephens, last seen as Lady Macbeth in The Tobacco Factories’ breathtaking first Company production).

Eddie’s disturbed when Catherine and Rodolpho begin to spend time together, and believes Rodolpho is only after the papers he needs to begin his US citizenship. But his distrust, his wife believes, is less to do with Rodolpho than his own feelings towards Catherine.

Alongside this is Marco (played by Aaron Anthony, (another Bristol Old Vic graduate, who played Banquo in the afore-mentioned production of Macbeth), who says far more with action than with words and bristles with unspoken levels of familial devotion and angst.

This is a story of possessiveness and machismo, where a man’s good name is worth the world. As Eddie’s fear of losing Catherine rises to the fore, his humour disappears and we see a man riddled with jealousy. The transformation isn’t a pretty one. Eddie becomes a man trapped within his own lies to himself, building up an elaborate network of reasons for not wanting his niece to be with Rodolpho.

Simon Armstrong as Alfieri the lawyer says, it was “a passion that had moved into his body, like a stranger.” 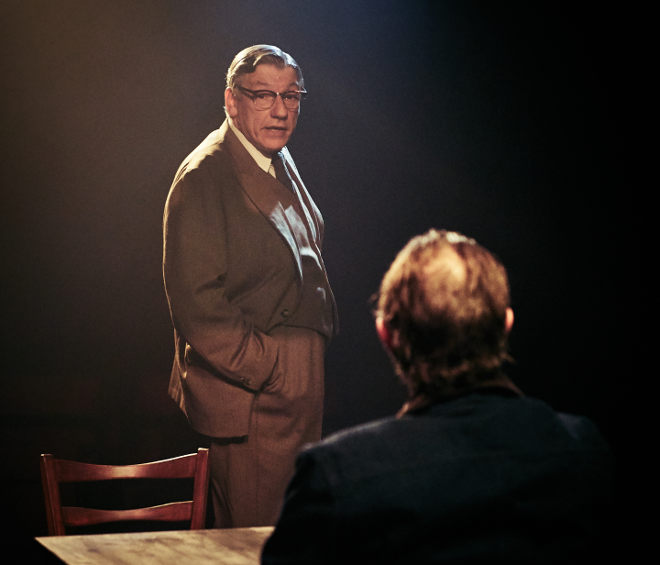 There are moments of sheer majesty in the production – scenes that will stay you, resonating with unuttered tension. A chair lifted is a warning from of one alpha male to another, while a few lines of a song can make you shiver with the richness of the loss echoing in the space.

All images in this review are by Mark Dawson Photography.

A View From The Bridge is on at Tobacco Factory Theatres in Bristol until 12th May 2018. Book tickets and find out more: www.tobaccofactorytheatres.com/shows/view-bridge-arthur-miller/ 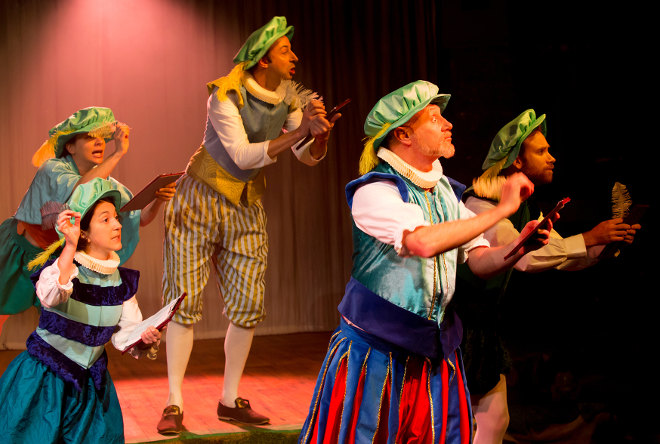 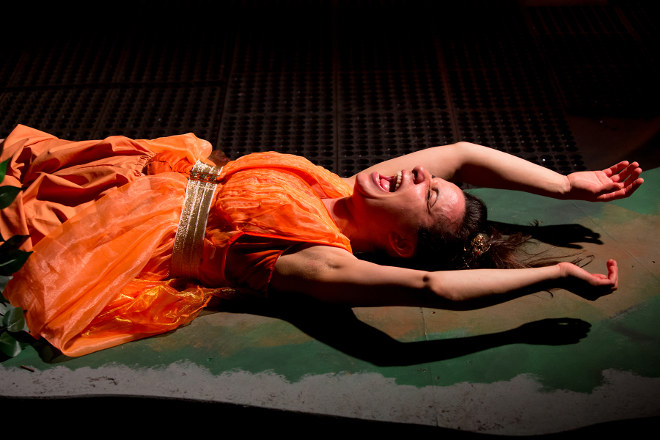 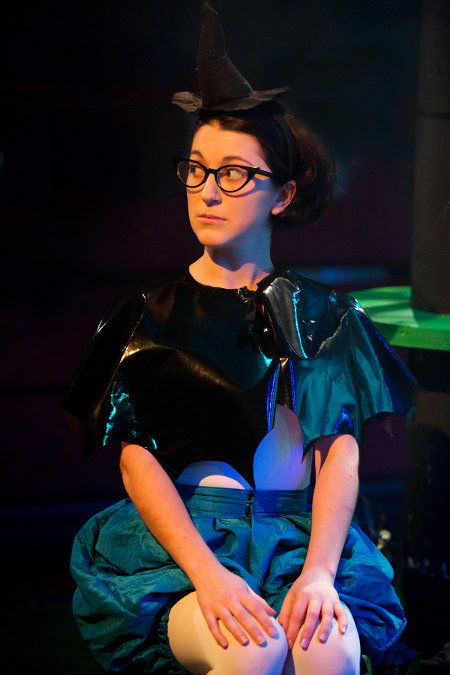 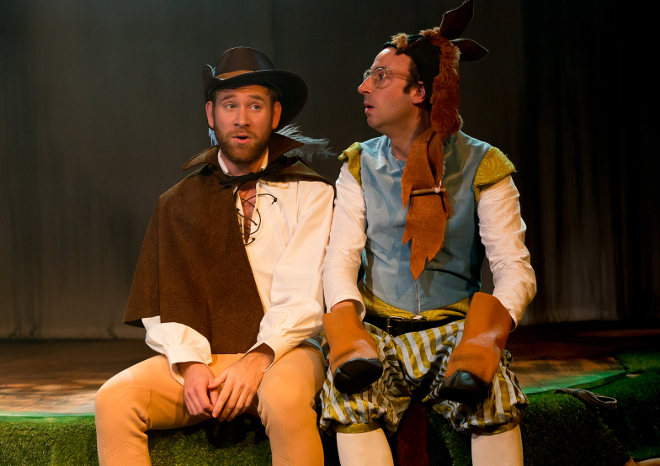