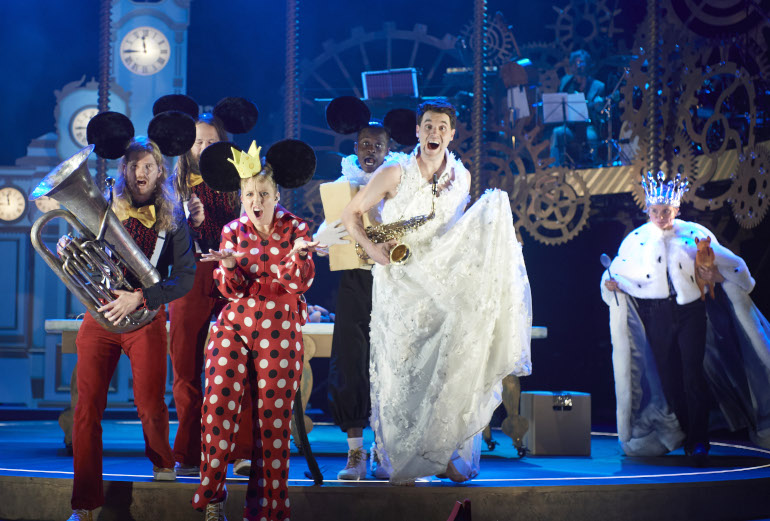 At the start of Bristol Old Vic’s seasonal extravaganza The Nutcracker, Claire is struggling to make herself heard in a household where Mum is still working late on Christmas Eve, her brother Eddie is absorbed by his handheld device and her dad is occupied by his own fantastical ideas to listen to his daughter’s worries about her imaginary unicorn Charlie. But then a mysterious visitor comes to the door, describing himself as a nutcracker maker and seeking the person who wants change. He give Claire a nutcracker doll who, she soon discovers, is very afraid, and all because of a mouse.

Director Lee Lyford, writer Tom Morris and lyricist Gwyneth Herbert serve up a rambunctious, colourful family show, with time stretching, skipping backwards and offering Claire a view of a tragedy she believes she can and must undo.

The set and lighting by Tom Rogers and Anna Watson draw us into a psychedelic world of enchantment where almost anything is possible, with clock-faces reminding us that time is precious, even on Christmas Eve when you might be wishing the hours away. 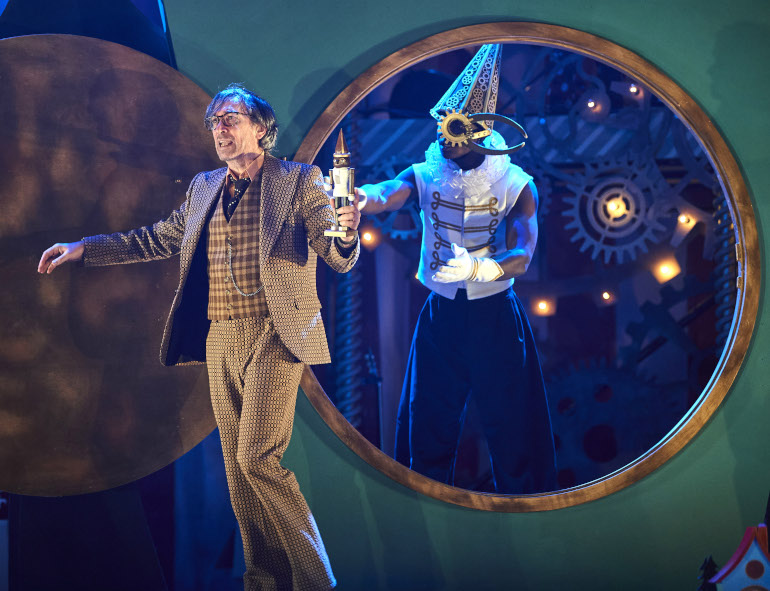 Tristan Sturrock as the mysterious visitor holds the audience, and time, in the palm of his hand, evoking our empathy and keeping the other characters on track as he relays his tale of errors in judgement resulting in a magic-wielding mouse queen (brilliantly conveyed by musical director Gwyneth Herbert) seeking revenge. Mae Munuo as Claire is convincingly child-like, curious and eager to do the right thing, even as she comes to understand how challenging identifying what the right thing to do can be. She also has a clear, powerful singing voice.

The whole cast bring energy and verve to the stage as most they portray multiple characters. Some of the most comical are Claire and Eddie’s discarded toys, among them a blue pants-wearing Action Man (Guy Hughes, who also plays ten-year-old Eddie and saxophone-playing Princess Curly Pearly utterly convincingly), Baboon with a Spoon (an impressively loose-limbed Patrycja Kujawska, who also plays Claire and Eddie’s mum as well as Queen Spoon), and Dog, the toy Claire likes least – a detail never explained (Kirris Rivieré, also Claire and Eddie’s dad and King Sausage). 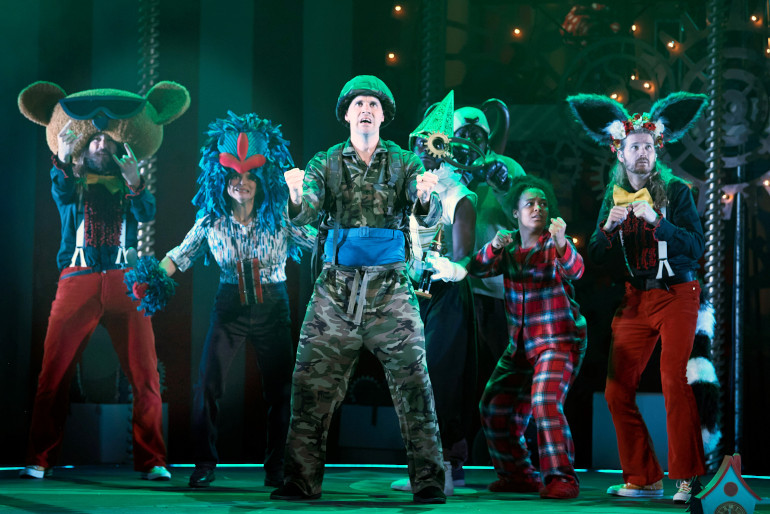 Even musicians Harry Bird and James Gow get in on the toy chest action, playing a chocolate-obsessed rock star teddy bear and a lovelorn long-tailed lemur.

The title role is played by Denzel Baidoo, in the actor’s remarkable stage debut. His complex emotional narrative comes over beautifully, complemented by his dance moves choreographed by Laila Diallo. The dance-off between The Nutcracker and the Mouse King (Tristan Sturrock) is a particular treat.

The Nutcracker teaches Claire, the nutcracker maker and the audience that to understand what needs to change, if anything, you must first see, and treasure, what’s really in front of you.

But this somewhat serious message is by-the-by when you’re taking in the glorious cacophony on-stage. With musicians and dancers populating the cast, it’s no wonder that this is a festive feast for the ears and eyes.

The Nutcracker is on at Bristol Old Vic until 7th January 2022. Find out more and get your tickets. 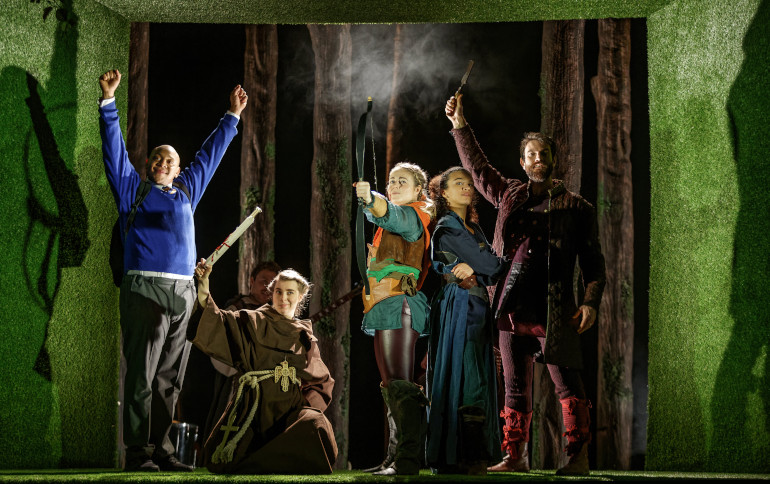 Seeking a festive show with love, laughter and unexpected poignancy? Attending Bristol Old Vic’s Christmas show is a firm festive tradition for many families, and 2021’s offering meets and surpasses all expectation. In collaboration with the Wardrobe Ensemble, this retelling of Robin Hood is as imaginative and visually spectacular as you’d expect. In the hands of directors Tom Brennan and Helena Middleton, the production also unexpectedly moving in a way that ensures it lingers.

We open with twelve-year-old school boy JJ (played brilliantly by Dorian Simpson, who succeeded in making me forget his six-foot+ frame so that at times I was truly concerned for the little child’s safety). JJ is a die-hard fan of Robin Hood and, as mentioned in a passing comment, of Oceans Eleven. When he opens a mysterious handwritten book about his favourite folk-hero, he is magically transported back in time to the 13th century.

What follows is a glorious mash-up of medieval adventure and Hollywood heist. If you’ve seen any of the Wardrobe’s previous film re-imaginings, you’ll be unsurprised by how beautifully this works.

Robin’s Merry Crew have long since disbanded due to a tragedy no one wants to talk about. That leaves JJ with the task of getting the gang back together, which requires family man Will Scarlet (a witty and urbane Tom England), a really angry Maid Marion (the convincingly lethal Katya Quist), and drunken, gambling Friar Tuck (embodied by Jesse Meadows with fabulous comic aplomb). 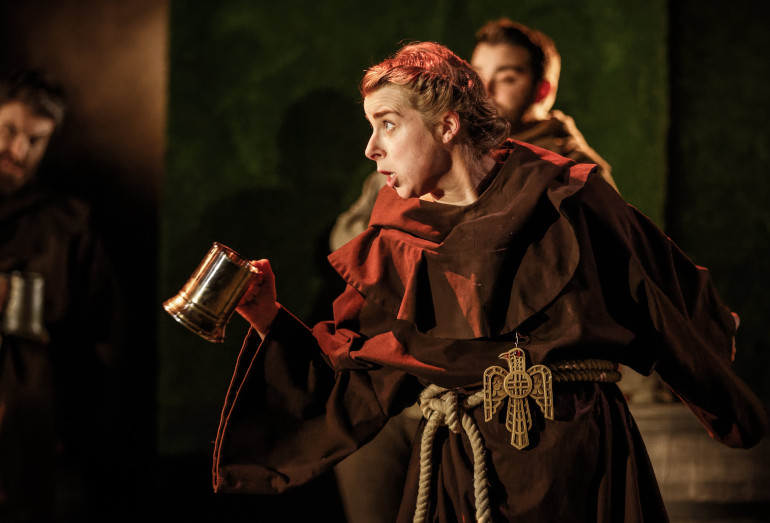 But the first task is to convince Robin Hood that she actually wants to step back into the role of hero.

Bristol Old Vic and the Wardrobe Ensemble are never too concerned about sticking to gender norms, and in this case , Kerry Lovell is the perfect casting for the troubled ex-outlaw as she unwillingly reunites with her former friends under JJ’s ebullient insistence and absolute belief. 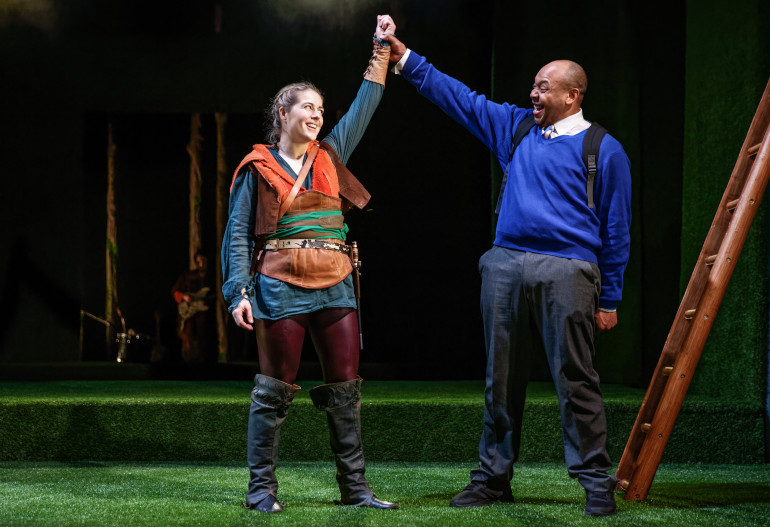 Kerry Lovell as Robin and Dorian Simpson as JJ

JJ’s determination that they should all wear bright green tights adds to the visual humour (not least at Meadows Friar Tuck somehow manages to tuck her robes into hers, creating the portly figure earlier incarnations have presented.

The Sheriff of Nottingham is on the brink of celebrating his 29th birthday for at least the second year, while fleecing his subjects of every hard-earn penny. With a page-boy wig that keeps his evil persona comic rather than terrifying, actor James Newton expertly crafts a spoilt but deadly rich boy who craves love but only knows how to inspire ridicule and fear. 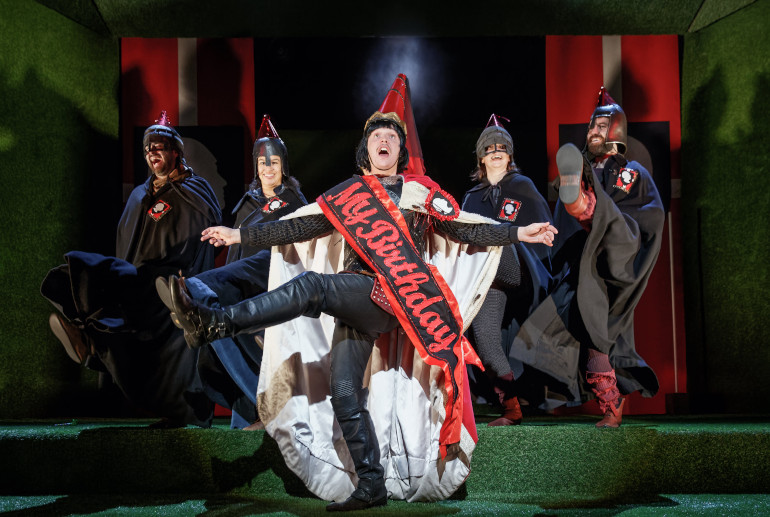 James Newton as The Sheriff with the company.

There are nods to the film productions JJ and much of the audience grew up with, as well as more modern movie and TV references, not least a sing-off and a dance-off. Look out for Will Scarlet ascending from above the stage in a lime-green body suit, plenty of sword-fighting from Robin and the Sheriff, and some exceptional slow motion running from the full Merry Crew. There’s also an outstanding kiss that will make you want to cheer.

Original compositions from Tom Crosley-Thorne alongside some familiar tunes had the audience clapping along, and there was a sense of being part of the story throughout.

This is a hugely enjoyable theatrical extravaganza crammed with jokes, drama and a few tears as well as a strong message about friendship and self-forgiveness. Exactly what’s needed on a dark winter’s day.

Robin Hood: Legend of the Forgotten Forest is on at Bristol Old Vic until at 8 Jan 2022. There are specific socially-distanced performances, signed, captioned, relaxed and audio described performances during the run. Find out more and get your tickets. 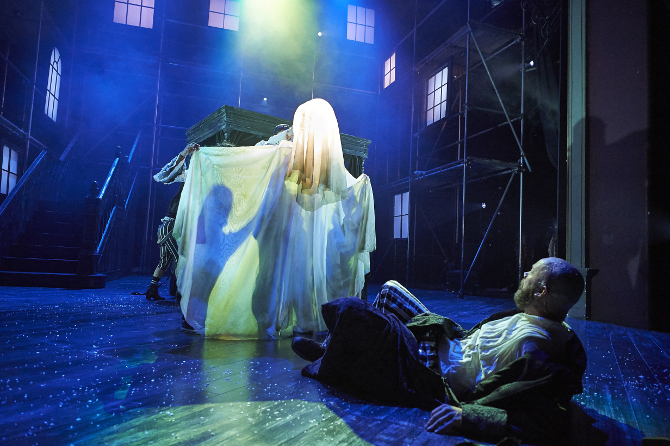 Over the years, Bristol Old Vic has set expectations high with its inventive, ingenious takes on classic Christmas shows. The production of A Christmas Carol met those hopes head on with a bundle of exceptional touches: 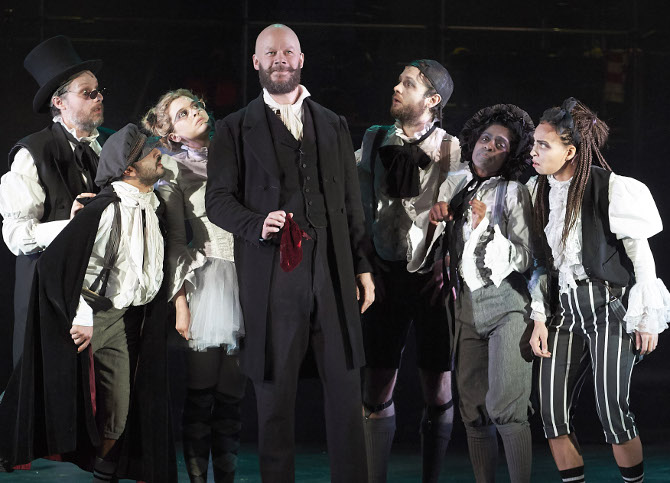 Adapted by Bristol Old Vic’s Artistic Director Tom Morris, Dicken’s spooky, marginally gloomy tale of redemption is revved up into an exultant spectacle. Scrooge is misanthropic and menacing (helped by actor Felix Hayes’ height and undeniable stage presence), but delightfully droll. Wry asides ensure that at times we’re almost on his side for eschewing the glitz and kitsch of Christmas in favour of a bit of peace and quiet… 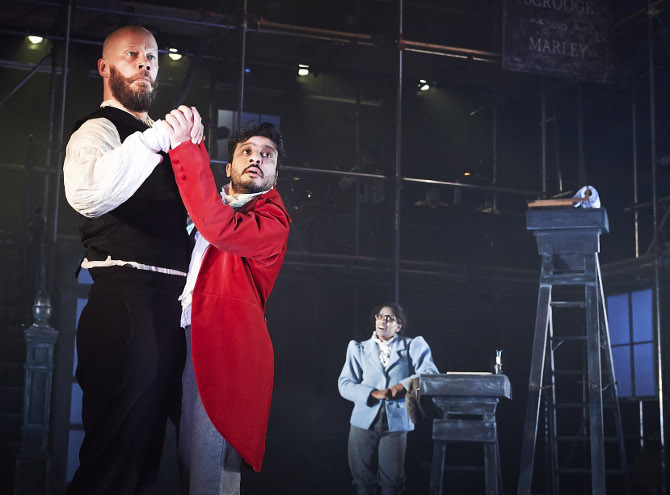 Nadia Nadarajah’s Bob Crotchet, shown far right above, converses entirely in British Sign Language, which serves both to enhance the physical exuberance of her performance, and to keep Scrooge at one remove as he struggles with and largely turns from what he refers to as “wavy hand language”, at least initially. 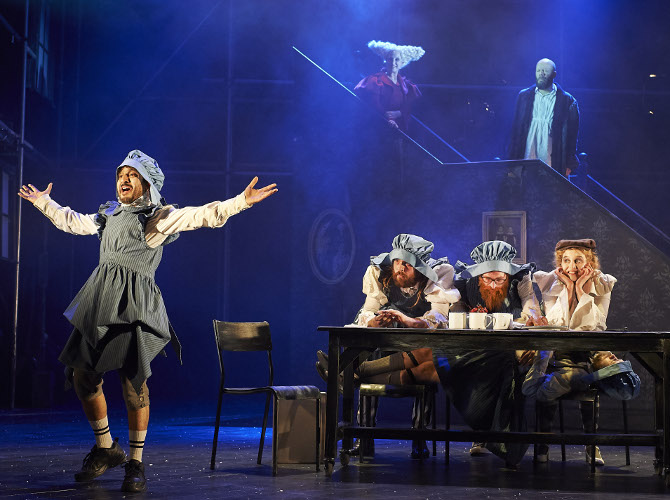 The majority of the cast members play multiple roles, with the audience invited into the theatrical mischief – snow is delivered in handfuls from the top of a rolling staircase, and when stepping from his nephew Freddie’s home to that of the Cratchit family, Scrooge passes Freddie the bonnet belonging to Mrs Cratchit, commenting, “You’ll be needing this”, and reminding us of actor Saikat Ahamed’s dual role. 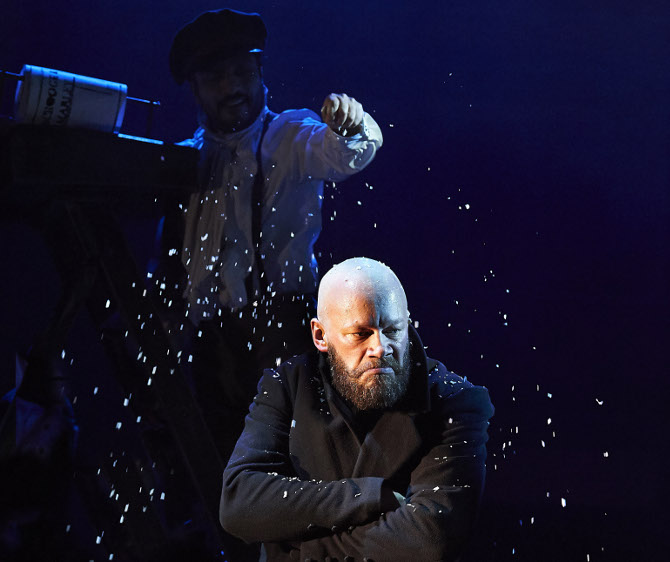 More doubling up occurs with several of the ensemble also providing the original musical score, right up to musical director and composer Gwyneth Herbert, who also plays the Ghost of Christmas Present.

Designer Tom Roger’s set is equally adaptable and dynamic – as well as the staircase mentioned above, there are doorways on casters and Scrooge’s four-poster bed, with Anna Watson’s skilful lighting adding atmosphere in spades. Humour is woven throughout, but never more so than in the scenes of revelry, including the Fezziwigs Christmas party where dance moves include flossing. The British Sign Language for ‘dance’ is incorporated as another enthusiastic move.

Audience participation  includes a brief singalong near the end, which, while fully optional, gives the audience a chance to release some of the giddy joy that has inevitably been building up throughout.

In many senses, Dicken’s story is a moral coming of age tale. With the Bristol Old Vic treatment, this production ramps up this theme, as Scrooge is reminded of the power of the imagination he’s set aside since his school days, as well as the love he let slip by and the value of human connection.

A gorgeously rambunctious and imaginative production.

A Christmas Carol is on at Bristol Old Vic until 13th January 2019. Find out more and book tickets.